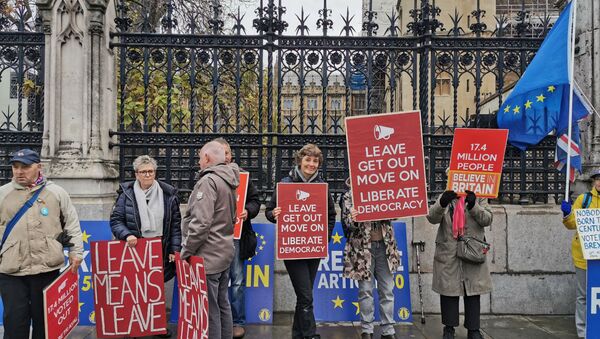 With a really tight timetable, a number of post-Brexit concerns have been raised, such as if the UK will align itself to the market rules effective in the European bloc or if the country will end up asking for an extension, which re-elected Boris Johnson has vowed not to.

The European Union will by no means put its own well-being in jeopardy when attempting to agree on a post-Brexit trade deal next year if Boris Johnson refuses to align the UK’s economy to single market rules:

“If Johnson will not move on alignment then there will not be a zero-tariff, zero-quota deal and certainly no chance of one being agreed in double quick time", a senior EU diplomatic source told The Sunday Times.

“We are not going to open up our single market to a big competitor who undercuts European economies on regulations. In the age of Donald Trump and the rise of China it would mean cutting our own throat", he stressed adding a colourful comparison.

A senior government figure told the edition that the British prime minister was inclined to reject Brussels’ demands that Britain meet European rules on a number of issues like competition, environmental protection, and workplace rights in return for tariff-free access to the single market as the price of a trade deal.

Shortly after a meeting of EU leaders at  the end of last week, French President Emmanuel Macron pointed out that “in the absence of regulatory convergence we will not be able to conclude an ambitious trade deal” since it would mean the European bloc “accepting dumping on its borders".

Per a report that is soon to be published by the Institute for Government and cited by The Times, a two-way trade deal with the EU would be possible by the end of next year only if Mr Johnson accepted a more limited agreement.

Raoul Ruparel, the Europe adviser to Theresa May when she was in office, insists in his report that the prime minister will have to be honest with his voters about the trade-offs required to strike a deal, saying: “The risk of the UK leaving the EU at the end of the transition period without an agreement is still very real — and too little recognised".

He urged the re-elected prime minister to transfer the key trade talks to the Cabinet office and empower it to make decisions instead of the Department for Exiting the European Union.

Addressing rumours and speculation about whether Johnson will ultimately ask for an extension, Ruparel strikes back saying that contrary to popular belief, saying "I believe negotiations in 2020 can return a clear outcome by the end of the year".

According to the current schedule, reiterated by Johnson as he was competing to stay at Downing Street in the 12 December vote, the UK is set to leave the EU by 31 January, while in the next 11 months the country will have to negotiate the final trade arrangements with the bloc via a Michel Barnier-led EU negotiating  team.

Michael Gove, the cabinet minister tipped to become Britain’s lead negotiator on a future trade deal in February, has stressed the government’s commitment to finalising it next year.

“What I can absolutely confirm is that we’ll have an opportunity to vote on the Withdrawal Agreement Bill in relatively short order and then we will make sure that it passes before January 31st", he told Sky News over the weekend.

“We will have concluded our conversations with the EU about the new framework of free trade and friendly cooperation by the end of next year", Gove said.