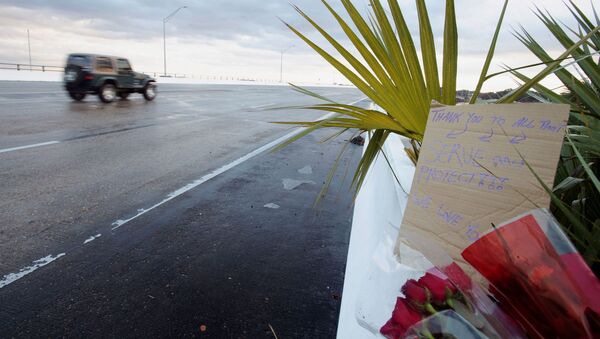 New details have come to light in the fatal Florida shooting, including chilling new evidence of the timing and what kind of legally bought rifle was used in the deadly attack.

It appears that the Saudi military gunman who carried out a deadly assault on US Naval Air Station Pensacola had left a cryptic message months before the attack, according to a federal report obtained by ABC News.

The Joint Intelligence Bulletin released Friday has it that Mohammed Alshamrani, a 21-year-old second lieutenant in the Saudi Air Force and a cadet in a US Navy flight training programme who authorities say shot dead three and injured eight people after opening fire at the air base last week, wrote the phrase “the countdown has started” on 11 September 2019.

Just prior to the attack, he reportedly posted a manifesto on his social networks lauding 9/11 mastermind Osama bin Laden.

He was also found to have made multiple references to non-Muslims as "infidels" while defending jihad. The report suggested that one post featured writings that are in tune with a 2010 statement by US-born cleric, al-Qaeda* inspirer and recruiter Anwar al Awlaki who was killed in a CIA-led drone strike.

"I'm against evil, and America as a whole has turned into a nation of evil", the post read, according to the report.

"What I see from America is the supporting of Israel which is invasion of Muslim countries, I see invasion of many countries by its troops, I see Guantanamo Bay. I see cruise missiles, cluster bombs and UAV".

The bulletin, issued by the FBI, Department of Homeland Security, National Counterterrorism Center, and the Defence Intelligence Agency, also revealed some horrendous new details of the attack – for instance, that it lasted 15 minutes, which was sufficient for the gunman to fire 180 rounds from his legally purchased Glock 9mm handgun with an extended magazine.

Days before the shooting, Alshamrani is said to have hosted three fellow Saudi military students at a dinner party where they watched videos of mass shootings.

Per the FBI-Jacksonville office, the investigation into the shooting remains active and they are working under the presumption "that this was an act of terrorism".

The Saudi student opened fire in an air base classroom on 6 December, killing three and wounding others before he was shot dead himself in an exchange of fire with police.

* Al-Qaeda is a terrorist group outlawed in Russia and in many other countries.