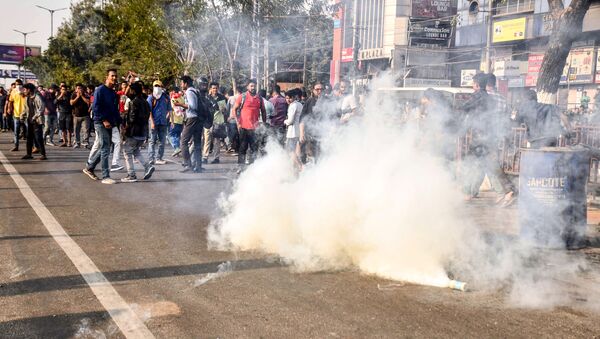 New Delhi (Sputnik): Protests against a new citizenship law have been intensifying and spreading across India. Two people have already lost their lives in Assam.

National Highway 34, one of the arterial roads that connect north and south Bengal, was blocked in Murshidabad. Trains were also stopped on several routes due to attacks by protesters.

In name of #CABProtests , #Bengal is allowed to burn, literally. pic.twitter.com/MpvIY28u3z

Officials reported several incidents in West Bengal where protesters targeted ambulances, railway stations and government offices while sloganeering against the law. Protesters claimed that the citizenship law will exclude Muslims from the National Register of Citizenship (NRC).

Muslims are concerned that in the absence of documents, the government will target them and make them stateless. India is home to 11 percent of the world's Muslims.

Scenes of arson at a railway station in Bengal. Government property looted and burnt. Tell me how many police or fire officials do you see at the railway station?
I was told not one life was lost. That's the only silver lining. pic.twitter.com/GEpsWbBhKZ

Expressing anguish over the violent protests, the West Bengal Governor Jagdeep Dhankhar said that the Chief Minister has to ‘bear true faith and allegiance to the Constitution of India… and I as Governor will ‘to the best of my ability preserve, protect and defend the Constitution and the law’.

Can people stop getting injured/dying, when innocent Muslims are protesting?

Protest against CAB and NRC at Gaya Bihar. pic.twitter.com/ZAZNliUzUs

Meanwhile, internet service has been suspended across Assam until 16 December. The government claims the ban is necessary to preserve peace and to maintain law and order.

Amid intensifying protests in Assam Indian home minister Amit Shah assured that “culture, social identity, language and political rights of the northeastern people will be untouched and Modi government will protect them."

The Indian government has enacted a citizenship law for non-Muslim migrants from Friday. The law provides opportunities to six religious minorities – Hindus, Parsis, Jains, Christians, Buddhists, Sikhs – from Afghanistan, Bangladesh and Pakistan to receive Indian citizenship if they arrived in India before 2015.