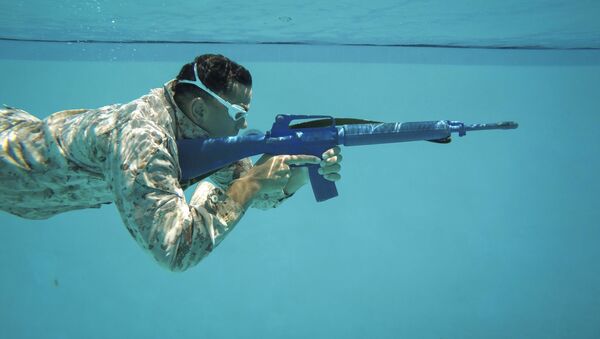 Deep diving might no longer be a safe way to escape gunfire, as the supercavitation technology allows projectiles to go through water easily for tens of meters.

The US special forces are testing next-gen bullets that can shoot through water – a technology that is set to broaden the capabilities of underwater warfare and signify new problems for submarines.

As first reported by the news magazine Defense One, the Special Operations Command has begun experimenting with the bullets from the Norway-based military contractor DSG Technologies.

A spokesperson for the Special Operations Command confirmed to Business Insider that the bullets are undergoing tests at the Combating Terrorism Technical Support Office (CTTSO), a programme office under the Assistant Secretary of Defence. They declined to say whether they were working specifically with DSG Technologies.

The average bullet travels through the air at around 2,500 feet (760 meters) per second. The problem is that the water is roughly 800 times as dense as the air, meaning that ordinary bullets lose momentum quickly when fired into the water.

The technology to reduce skin friction drag and speed them up is called supercavitation. The tip of DSG’s bullet is coated in tungsten, allowing it to create a small air bubble around the bullet that decreases the water pressure and reduces the drag. The same effect has been used on torpedoes (including the Russian-built Shkval and its descendants) and propellers.

“The reason [the bullet] does not stop in the same way as conventional ammunition does, is because the CAV-X projectile is perfectly balanced through its own rotation, and the shape helps form the perfect cavitation body around the projectile,” DSG’s chief science officer Odd Leonhardsen said of the firm’s patented technology.

“The only part of the projectile that will be in contact with the water to create drag/friction is the tip.”

These bullets can be used in conventional weapons when shot into the water from above, but a gas-piston firearm would be required for underwater shooting.

According to Defense One, tests performed by DSG show that the .50 calibre bullets can travel up to 60 meters underwater or slice through 2 centimetres of steel when fired from 17 meters away through water.

Odd Leonhardsen told the magazine that DSG are selling to other governments, all of them either NATO allies or NATO-friendly countries, and that they are not selling to private-sector consumers.