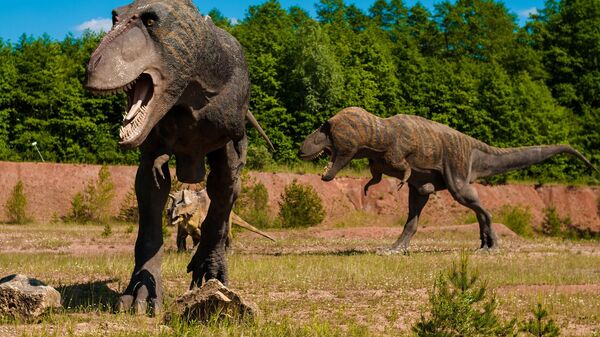 Commenting on the findings regarding the state of Earth’s oceans millions of years ago, the scientist pointed out that they don’t know for sure what caused the mass extinction event.

Researchers from Northwestern University made an interesting discovery regarding the state of Earth’s climate prior to the Cretaceous–Paleogene extinction event that was possibly caused by a catastrophic asteroid impact and which wiped out three-quarters of animal and plant life on our planet about 66 million years ago, phys.org reports.

Having measured the calcium isotope composition of fossilized clam and snail shells dating back to that time period, which were found in Antarctica, the scientists detected an apparent surge of carbon in the planet oceans prior to the extinction event, which was reflected by changes in the shells’ chemistry.

"Shells grow quickly and change with water chemistry", said Benjamin Linzmeier, the study's first author. "Because they live for such a short period of time, each shell is a short, preserved snapshot of the ocean's chemistry."

The research team further hypothesised that this carbon influx was likely caused by “long-term eruptions from the Deccan Traps”, one of the largest volcanic features on Earth which covers about 500,000 square kilometres in modern-day India, and that these huge amounts of carbon dioxide “acidified the oceans,” the media outlet notes.

"The Earth was clearly under stress before the major mass extinction event. The asteroid impact coincides with pre-existing carbon cycle instability. But that doesn't mean we have answers to what actually caused the extinction," the senior author of the study Andrew D. Jacobson remarked.

The researchers also suggested that the “ocean acidification effects” of Earth’s distant past might be considered “good analogs” of the anthropogenic carbon dioxide emissions today.

"Perhaps we can use this work as a tool to better predict what might happen in the future. We can't ignore the rock record. The Earth system is sensitive to large and rapid additions of CO2. Current emissions will have environmental consequences," Jacobson mused.

The study is expected to be published in the January 2020 issue of the journal Geology.