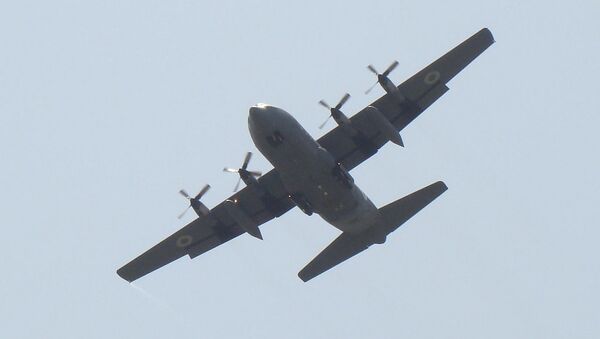 Chilean officials announced Wednesday afternoon they had located debris from a Chilean Air Force C-130 transport that disappeared the previous day while bound for Antarctica.

While conducting a search for signs of the propeller-driven airplane on Wednesday, the Chilean ship Antarctic Endeavor discovered sponge remains floating in the sea roughly 30 kilometers from where the C-130 was last seen on radar, according to an announcement by the Chilean Air Force.

The sponges are believed to have been attached to the plane's fuel tanks, which are located inside its wing ponds. However, the items are being returned to the mainland for further analysis, according to the press release.

Carrying 17 crew and 21 passengers, the C-130 took off from Chile's Punta Arenas on Tuesday afternoon, bound for a military installation on King George Island, just off the coast of Antarctica and about 770 miles southeast of their departure point. However, they didn't make it there, disappearing about 450 miles into the trip, while over the Drake Passage, according to the BBC.

"We will continue the search and hope for a better result," he said, noting the military was using sonar to search for irregularities on the ocean floor, which can reach depths of 11,500 feet in that part of the sea.

​Earlier on Wednesday, US Southern Command announced it was dispatching a P-8 Poseidon electronic surveillance aircraft to Punta Arenas from its base in El Salvador to help aid in the search effort.

"Our thoughts and prayers are with the people of Chile and with the families of the missing as we join other regional partners supporting Chile’s ongoing search for the C-130, its crew and their passengers,” SOUTHCOM commander US Navy Adm. Craig Faller said in a press release.

The Brazilian Ministry of Defense said later Wednesday that one of its ships had discovered personal items and debris compatible with the plane roughly 500 kilometers from the southern Argentine city of Ushuaia.

Built by the Lockheed since the 1950s, the heavy-lifting aircraft has been in service continually ever since, serving in dozens of nations and filling a wide variety of roles, from transport to fire fighting to close air support gunship.