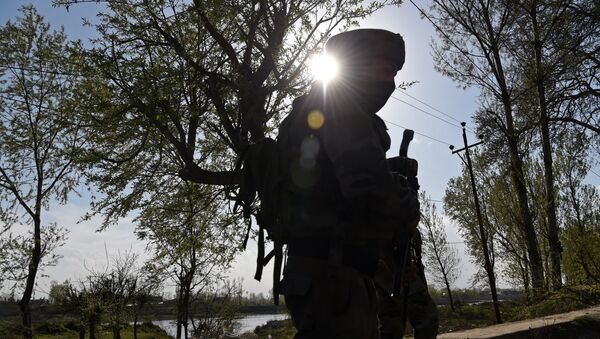 New Delhi (Sputnik): The issue of suicide and ‘fratricide’ - when a soldier or police officer kills a fellow service member in the Indian armed forces was recently raised in the Lower House of the Indian Parliament, with the government citing policies undertaken to check such incidents.

An Indian Army company commander was killed, and two others were injured on Monday morning following a dispute between him and in the Indian tribal state of Jharkhand.

The soldier committed suicide after attacking his company commander and injuring others.

While both - the commander and the soldier - died on the spot, injured personnel were rushed to the hospital. Their condition was reported as “stable”.

According to media reports, the personnel of Chhattisgarh Armed Forces were posted for election duty in the neighbouring State of Jharkhand which is undergoing legislative assembly elections for 81 seats.

The incident occurred following a heated argument when soldier Vikram Rajwade allegedly shot at Company Commander Mela Ram Kurre killing him on the spot. Two other soldiers were injured while trying to intervene.

According to Anish Gupta, the top police official of Jharkhand’s capital city of Ranchi, the incident took place early on Monday at 6.30, at the place where these soldiers were stationed after the second phase of polling in the elections that will be conducted in five phases in Jharkhand.

Gupta said prima facie it was a case of a dispute between the company commander and the soldier, where the soldier used his weapon to shoot the commander and kill himself. “The actual reason behind the conflict can only be ascertained after a thorough investigation.”

The State Assembly Elections are being held in Jharkhand from 30 November to 20 December to elect the 81 members of the assembly. Results will be declared on 23 December since the pre-election term of Jharkhand Legislative Assembly ends on 27 December.

Not the First of Its Kind

Similar incidents of conflict between army service members have occurred in the past too. On 4 December, Comrade Rehman Khan fired on personnel at the Indo-Tibetan Border Police camp in the Narayanpur district of Chhattisgarh State. Four soldiers died on the spot, and three suffered injuries. Later, Rahman also shot himself dead.

In reply to inquiries by Parliament in early December over the suicides and fratricides in Indian forces, the Indian government replied saying that there were 85 suicides by Indian Armed Forces personnel in the year 2019, compared to 107 in 2018.

Commenting on the steps taken by the government to ensure the mental and emotional well-being of personnel, it was said that service personnel receive training on mental health and psychological counselling. Further, various workshops and lectures on these issues are conducted regularly.

Indian Home Minister Amit Shah recently asked all chiefs or Directors General of the security forces to take steps to ensure that constables are allowed to stay with their families for about 100 days.