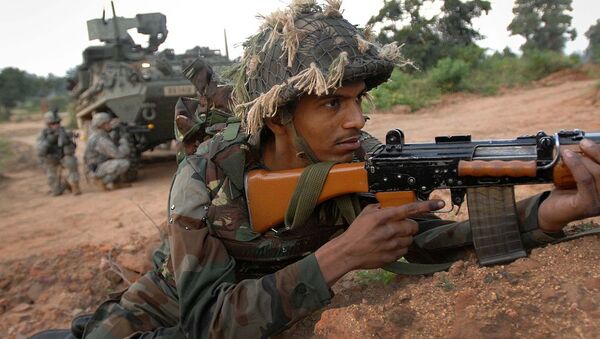 New Delhi (Sputnik): The issue of honey-trapping by foreign intelligence agencies has been gaining credence in India, with the Indian Army issuing an advisory asking its personnel to be cautious and avoid strangers posing as women of foreign origin or spiritual gurus (leader).

Speaking in the Rajya Sabha, the upper house of Indian Parliament of Monday, the Minister of State said the government had taken steps to sensitise service personnel and their families about honey-trapping, used as a modus operandi by foreign intelligence operatives.

Special attention is also being paid to recruits at training institutes, he added.

As per the advisory issued by the government, the Pakistan-based intelligence agencies are targeting personnel deployed in sensitive areas of the country.

The minister said: "Simultaneously, regular intelligence liaisons with other agencies are maintained to detect such attempts. Additionally, security measures to safeguard classified documents and information are in place and updated regularly to counter emerging perspective threats."

Honey- trapping, although an old tactic to trap influential people, has caught pace with the increased use of social media. This became evident as the Indian Army warned soldiers to be wary of instant messaging and dating apps, including Tik Tok.

According to media reports, nearly 50 army men came under the scanner of intelligence agencies for falling victim to honey-traps by the ISI agent in India's Rajasthan state in early 2019.

One of the soldiers, in touch with a profile in the name of Anika Chopra on Facebook, regularly chatted on the social media and allegedly exchanged details and information about the jawan's armoured unit and its movement. The Rajasthan Police later arrested him.