Philippines Evacuates Over 225,000 People Due to Powerful Typhoon - Reports 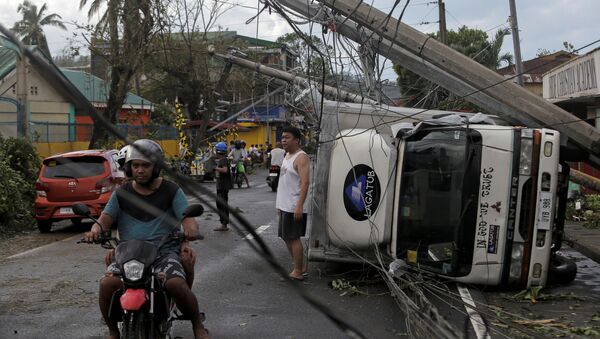 MOSCOW (Sputnik) - The Philippines have evacuated more than 225,000 people as Typhoon Kammuri, also known as Tisoy, continues to barrel through the country and bring with it heavy rains and strong winds, the Philippine Star newspaper reported on Tuesday.

Tisoy has torn through southern Luzon and is now moving toward Mindoro Island. Three people have been reported injured so far.

The typhoon has forced the cancellation of hundreds of domestic flights, mostly to and from the Bicol region, according to the Philippine Star newspaper. Local governments in the affected areas have canceled classes in all schools to ensure students' safety, the daily added.

A #typhoon struck the #Philippines on Tuesday, killing one man and bringing heavy rains that prompted the suspension of air travel and government offices in the capital, and warnings of floods,storm surges,and landslides.#TyphoonTisoy #TyphoonTisoyPH #PhilippinesEarthquakeAppeal pic.twitter.com/kzYmlpnpya

​According to the emergency situations department, a total of 300,000 people are at risk of flooding, including 105,000 people in danger from Mayon Volcano mudflows. The typhoon is expected to leave the Philippines by Thursday.