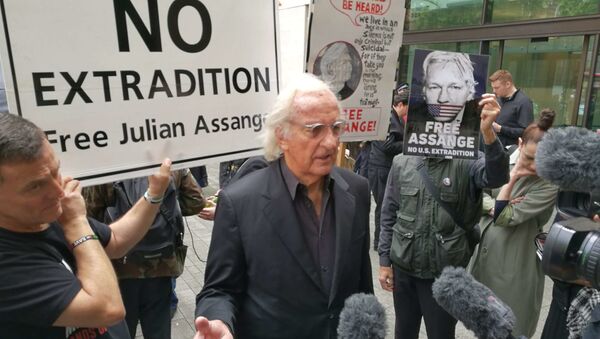 The documentary filmmaker is only one of many high-profile advocates for the WikiLeaks co-founder who was arrested earlier this year after he was dragged out of the Ecuadorian Embassy, including actress and model Pamela Anderson, designer Vivienne Westwood and musician Roger Waters.

BAFTA-winning documentary maker and journalist John Pilger has taken aim at the UK-based Guardian media outlet following an editorial from 20 November, which called to not extradite WikiLeaks founder Julian Assange, currently in Belmarsh prison, to the US.

The outlet commented on Sweden’s decision to drop the probe into rape allegations against the whistleblower, saying “the path has now been cleared for the US charges against him” where he faces 175 years in prison for publishing classified documents.

“It is unclear whether it would be safe to extradite Mr Assange to the US. It is certain that it would not be right,” it stated, also adding that it is not a question of “how wise Mr Assange is, still less how likable.”

Pilger noted, however, that if the WikiLeaks co-founder “were to succumb to the cruelty he has endured, week after week, month after month, newspapers like the Guardian would share the responsibility.”

“What the Guardian was really saying was this: ‘We are the fourth estate, the bearers of true liberal principles, the guardians of sacred rights. Such as the right to suck up to power. The right to invade countries and the right to smear those who expose our double standards and, if necessary, the right to destroy them,’” the journalist said during the launch of his new book: “In Defense of Julian Assange”, to which he is a contributor.

Investigation Reveals Further Conflicts of Interest for Chief Magistrate Overseeing Assange's Case
Earlier this week, Sweden discontinued its investigation into a rape allegation against WikiLeaks founder Julian Assange that began in 2010, although the famous whistleblower still faces criminal charges in the UK and US, which is seeking his extradition over the 2010 leaks of classified government data. If extradited, he faces a sentence of up to 175 years over espionage. Meanwhile, his father, John Shipton, said in an interview with the Norwegian outlet VG that the extradition to the US would mean the death of his son.

Assange was arrested and jailed in April after being dragged out of the Ecuadorian Embassy in London, where he had been living since 2012. Since that time, the WikiLeaks co-founder has been kept in detention, waiting for hearings on his potential extradition, which he vigorously opposes.