'He is Strong and Will Carry On': Experts Reflect on Sweden's Move to Drop Charges Against Assange 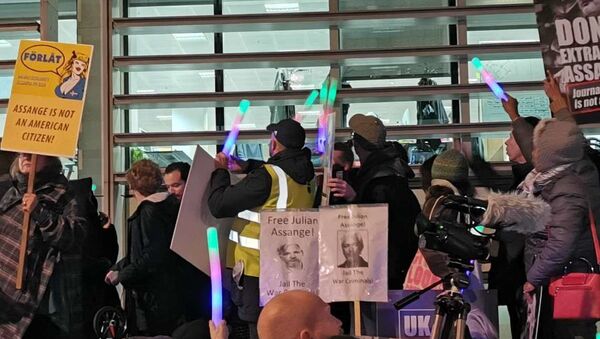 The news was announced by the Swedish prosecutor on Tuesday. Deputy Chief Prosecutor Eva-Marie Persson held a press conference where she confirmed that the rape investigation has been discontinued.

The evidence in the case “weakened considerably due to the long period of time that has elapsed since the events in question,” and “is not strong enough to form the basis for filing an indictment”, Presson told reporters.

The rape charges against the Australian whistleblower, who has repeatedly denied any wrongdoing, date back to 2010 after he visited Sweden to attend a WikiLeaks conference in Stockholm.

Assange was accused of rape by one woman and sexual assault by another, but he denied the allegations saying that sexual contacts were consensual.

In 2012, after the UK supreme court rejected his appeal against extradition to Sweden, Assange skipped bail and asked for political asylum from Ecuador and hid in the Ecuadorean Embassy in London out of fear he would be extradited to the United States to face the death penalty for leaking Afghan war logs.

The Swedish prosecutors in 2017 dropped the preliminary investigation into the rape allegation and then reopened the case once again in May this year.

However, in June the Swedish court ruled that Assange should not be detained for alleged rape in absentia but could be questioned in the UK.

The whistleblower is currently being held in Belmarsh prison and has been in custody since April after he was dragged out of the Ecuadorian Embassy in London following Ecuador’s decision to withdraw his asylum.

He was set to walk free on 22 September after serving his 50-week sentence for skipping bail in 2012, but his custody was extended due to fears he would abscond.

Reacting to the latest news, Kristinn Hrafnsson, WikiLeaks editor-in-chief, said, "Sweden has dropped its preliminary investigation into Mr Assange for the third time, after reopening it without any new evidence or information.”

He also called to now focus on the “the belligerent prosecution of the United States and the threat it poses to the First Amendment."

Charges against Assange in the US

The United States government formally submitted an extradition request to the United Kingdom for the WikiLeaks founder in June. He is wanted in the US for espionage.

On 23 May the US Justice Department announced 17 new charges against Assange under the Espionage Act in a move to charge him with publishing classified material which critics say challenges the First Amendment.

All up the whistleblower faces 18 charges including an earlier federal indictment. Wikileaks has claimed that Assange will serve 175 years in prison if he’s found guilty of all the charges filed against him by the US DoJ.

While Assange awaits his full US extradition proceeding in February, he is required to appear before the court every 28 days.

Fighting Extradition to the US

On Monday Assange appeared in a video link from Belmarsh high-security prison during a brief 5 minute hearing in London’s Westminster Magistrates’ Court.

His lawyer - Gareth Peirce - appealed to the court that her client can’t properly prepare for his “challenging” extradition case as he’s been given an unsuitable computer.

“..The most important of the impediments that we are facing is Mr Assange's ability to access what he needs to work on his own case,” she said.

However, District Judge Vanessa Baraitser said she had no jurisdiction over prison conditions.

After years in detention questions regarding Assange's health have been raised, with him appearing frail and confused at court hearings, and Peter Tatchell, a British human rights campaigner, believes that detention and prolonged legal battles are taking a toll on Julian's health.

“But he is strong and will carry on,” Tatchell said. “There is no public interest justification for the UK authorities to collude with the US by extraditing Assange to the US. Julian published information that exposed US war crimes. That was a great public service. The UK's consent for extradition should be withdrawn,” he added.

“The health issues are real. He lost already more than 16 kilos and he is kept in total isolation in prison. He can not talk with other prisoners. This is no human treatment at all, while the UK and US are talking about human rights, they deny it from their political prisoner,” Vermaut stressed.

Several weeks ago UN Special Rapporteur on Torture Nils Melzer warned that the treatment of Assange in prison is putting his life “at risk”. The independent UN rights expert had also accused the British government of “outright contempt” for Assange's rights and integrity.

“Unless the UK urgently changes course and alleviates his inhumane situation, Mr Assange's continued exposure to arbitrariness and abuse may soon end up costing his life," Melzer, said in a statement on 1 November.