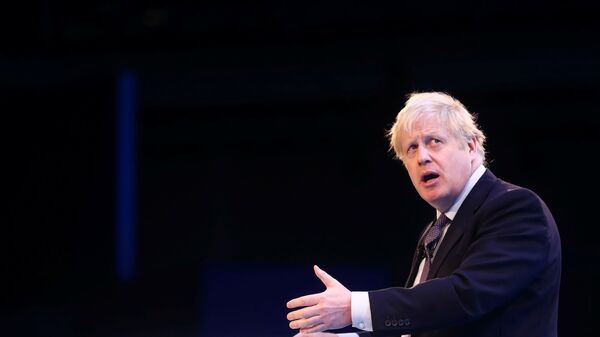 © AFP 2023 / SIMON DAWSON
Subscribe
International
India
Africa
Boris Johnson’s private life has been the subject of increased scrutiny for over a decade, with media uncovering at least three extramarital affairs and one confirmed extramarital child.

Jennifer Arcuri, an American businesswoman and Boris Johnson’s alleged ex-lover, has claimed that the prime minister once told her about the existence of a child born out of wedlock.

Speaking on Good Morning Britain on Monday, Arcuri was asked whether she had an affair with Johnson during his stint as mayor of London.

She replied: “I’m not going to answer that question, but as you can tell there was a very special relationship there and when it did come out, half the people already assumed the affair and told me to admit it.”

When asked whether she knew how many children Johnson may have, she replied: “I think I have a vague idea. I asked him once.”

“He had the four, and one” with another woman, she added.

Arcuri’s relations with Johnson came under public scrutiny in October over allegations that she had unlawfully received thousands of taxpayers’ pounds for her business ventures as well as places on mayoral business trips when Johnson was at City Hall.

A government inquiry has found that the £100,000 granted to a company run by Arcuri by Johnson’s office was appropriate, but a related report by the Government Internal Audit Agency still raised doubts among the opposition. The prime minister himself has denied that he failed to declare a conflict of interest in Arcuri’s case.

The Independent Office for Police Conduct has shelved its announcement on whether it would investigate possible criminal misconduct on the part of Johnson until after the December general election.

Jennifer Arcuri, who is now living in the US, has been pressed repeatedly over the nature of her relations with the prime minister, but she has never explicitly confirmed nor denied that they had been lovers, and neither did Boris Johnson.

How many children does Johnson have?

Johnson’s private life is nowhere near an open book. For instance, the exact number of his children is not public knowledge (his Wikipedia article puts it at ‘5 or 6’).

He officially had four children together with his second wife Marina Wheeler. All of them are of age by now. But he also has had a number of documented affairs, including one with then-Spectator columnist Petronella Wyatt.

Rumours of their fling began to surface in 2004; it was alleged that they had been dating for four years by then. Johnson originally dismissed the speculation as “complete balderdash”, but Wyatt’s own mother soon confirmed it to the press. She also said that Petronella had a miscarriage and an abortion when dating Johnson. The affair cost him his post as shadow culture minister.

In 2010, the Daily Mail reported that he had another affair, this time with art consultant Helen Macintyre, who he also allegedly had a daughter with. At the time, Johnson escaped censure when he admitted to an undeclared conflict of interest (Macintyre worked at City Hall in an unpaid capacity) and promised to “bear in mind the definition of close associate for the future.”

The lovechild that couldn't be hidden

After the Daily Mail published purported photos of the child and reported that she was named Stephania, Macintyre attempted to hide the paternity of their child via a court injunction.

However, the Court of Appeal ultimately ruled in 2013 that the media was justified in publishing it because it “was a public interest matter which the electorate was entitled to know when considering [Johnson's] fitness for high public office.”

Neither she nor Johnson has ever confirmed – or denied – his fatherhood.

The affair with Macintyre is now being reviewed as part of the investigation into Jennifer Arcuri by the London assembly’s oversight committee. Len Duvall, the Labour chairman of the committee, told The Guardian: “I’m looking at the paperwork into Helen Macintyre. We need to understand that because he was advised to make those declarations in the future. The question is why did he hide the new relationship with Arcuri?”