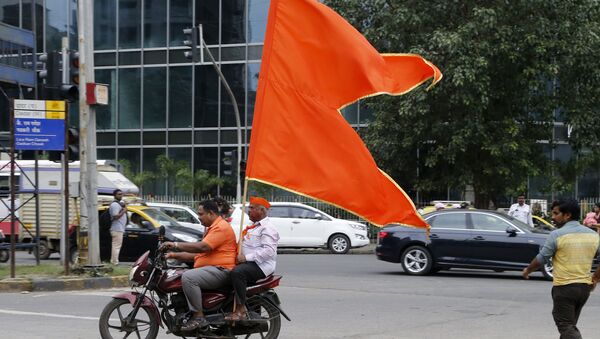 New Delhi (Sputnik): Netizens are bombarding Twitter with amusing memes targeting the issue of government formation in the Indian state of Maharashtra.

With political parties failing to arrive at a consensus to form a government in Maharashtra state, prompting imposition of the President’s Rule, people on Twitter are projecting the situation in the funniest ways possible.

Be it bickering among political parties or fighting for the chief minister’s post, Twitter has memes for every situation. The four major political parties in Maharashtra are – Prime Minister Narendra Modi’s Bharatiya Janata Party (BJP); its ally Shiv Sena (SS), a right-wing Hindu party; the Nationalist Congress Party (NCP), and the Congress.

The state was ruled for five years by the BJP-Shiv Sena alliance before state legislatively elections delivered a fractured mandate without giving any single party or alliance enough seats required to form a government on its own.

In the state of Maharashtra, Shiv Sena, the second-largest party in the 288-member State Assembly with 56 legislators after the BJP (105), was initially asking the latter to agree to provide it with half of the full five-year term to run the new government. Shiv Sena claimed it had a tacit understanding of the 50:50 formula ahead of the state elections.

Shiv Sena approached its arch-rival the Nationalist Congress Party (NCP) and the Congress alliance after the former was invited by the state governor to show its strength. The party was given 24 hours to prove its political strength, but after it sought an extension of the deadline, Governor Bharat Singh Khoshiyari extended the offer to form the government to the NCP instead.

While the political discussions were continuing, the governor recommended President’s Rule be imposed, leaving all parties flabbergasted.

The confusion and disagreements have led to Twitter being flooded with memes that are tickling the funny bones of netizens.

Maharashtra Governor is Doing this With #ShivaSena 😁

Meanwhile Sharad Pawar who didn't let his own party worker to share frame with him, how could have Aaditya Thackeray as a CM face?

On many occasions both the BJP and the Shiv Sena have become fodder for memes on the internet because both parties have been known in the past for publicly criticising each other yet forming coalition governments in the state to retain power.

The Shiv Sena and BJP are the Ross and Rachel of Indian politics pic.twitter.com/TAGx5MrvCK

Sena- why the hell you made alliance with NCP
BJP- I thought we were on a BREAK
Note: only for FRIENDS fan

President’s Rule is a situation when the state is administered by the governor on behalf of the president of the country.