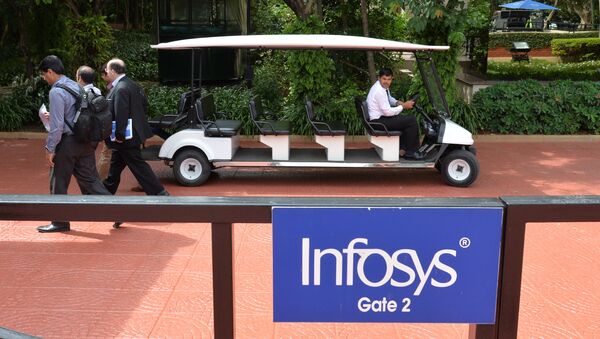 Facing another controversy on Tuesday, Infosys CEO Salil Parekh has been accused of not adhering to the company’s standards.

In a letter, a whistleblower from Infosys’ finance department has claimed that $2.2 million was spent on the CEO’s travel as he has still not shifted to India's IT-hub of Bengaluru – where the company’s headquarters is located.

"Though it is a year and eight months since Parekh joined the company, he operates from Mumbai in violation of the condition that the CEO has to be based in Bengaluru and not Mumbai. What is stopping the board to insist on his movement to Bengaluru?" the whistleblower has asked in the unsigned and undated letter written to Infosys chairman and co-founder Nandan Nilekani and independent directors on the board, Indian news agency IANS said.

Company norms require the CEO to reside in the city where the headquarters is located. However, Parekh is allegedly based in Mumbai, and as the letter claims, he flies to Bengaluru twice every month, incurring expenditure of $2.2 million for the company.

The anonymous employee, who fears consequences if his/her name is revealed, has pointed in the letter at: "Four business class tickets per month plus home to airport drop in Mumbai, airport pick-up in Bengaluru and drop on the return journey."

The employee has sought to know the reasons behind the company bearing the CEO’s travel expenses of daily commute to the office and home if it doesn’t do the same for its other employees.

Urging officials to take action on the CEO, the whistleblower said: “Mr Parekh is a smart cookie. He has taken an apartment on rent in Bengaluru to hoodwink people who may question him, but that does not mean he has relocated to Bengaluru. He has done this with malicious intentions to mislead the board and the company's founders (sic)," IANS quoted from the letter.

"This kind of involvement of the CEO in the company is the worst that we have seen till date. This, unfortunately, is not setting the right example for other employees to follow,” the letter added.

The first letter accusing the company CEO of indulging in unethical practices led to a 16 percent drop in the company’s shares. It was the worst single-day decline in shares that Infosys has suffered. The $11.8-billion company has a market capitalisation of nearly $47.7 billion.