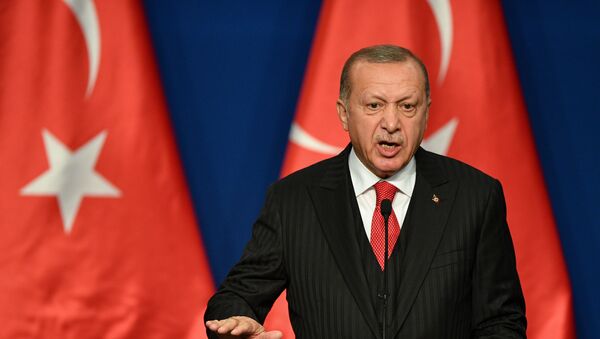 President Recep Tayyip Erdogan has warned that Ankara may wrap up talks on joining the EU in response to the bloc's sanctions against Turkey.

“[The EU] has levied sanctions against us since 1959. We’ve always been distracted by promises to be accepted. However, these promises have never been kept. You should know that today Turkey is a country that sits at the negotiation table with you, but this table is not tied to us and [the negotiations] may end soon,” Erdogan told reporters in Ankara on Tuesday.

The remarks come after EU foreign ministers on Monday agreed on economic sanctions against Ankara for violating Cyprus’ maritime economic zone by drilling off the island.

Turkey condemned the move, warning that it would not stop drilling in the eastern Mediterranean as it is operating on its own continental shelf or areas where Turkish Cypriots have rights.

The developments followed EU Parliament President David Sassoli last month slamming Ankara's military operation against Kurdish forces in northern Syria, adding that “against this background, the European Parliament reiterates its call for the [EU] accession negotiations with Turkey to be suspended.”

The operation was launched on 9 October, and about a week later a 120-hour ceasefire was clinched, with Erdogan then announcing that the truce will be permanent.

The EU and Turkey kicked off accession negotiations back in 2005. However, bilateral relations deteriorated after the failed coup in Turkey in July 2016, with Ankara accusing Europe of providing asylum for coup plotters.

Ties further worsened when several European countries, including Austria, refused to allow Turkish political figures to hold rallies for diasporas abroad ahead of the country's constitutional referendum, which was held in April 2017.

Last year, Erdogan said that waiting for membership in the EU "exhausts" Turks, responding to French President Emmanuel Macron’s remarks that he could offer partnership, but not membership "to preserve the anchoring of Turkey and the Turkish people in Europe […].”