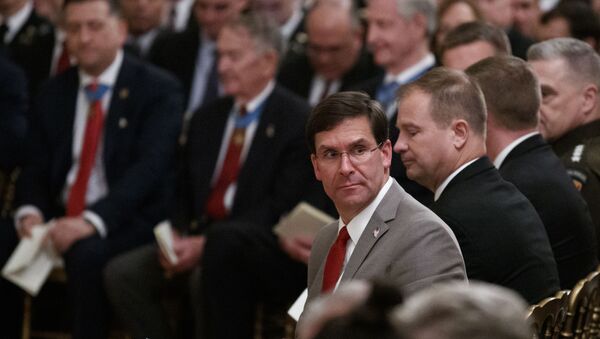 WASHINGTON (Sputnik) - Russia and China challenge US supremacy on the battlefields of the future by vigorously pursuing Artificial Intelligence (AI) military programs and the United States must not lag behind, US Defence Secretary Mark Esper said.

"Advances in AI have the potential to change the character of warfare for generations to come ... Whichever nation harnesses AI first will have a decisive advantage on the battlefield for many, many years. We have to get there first", Esper told the National Security Commission on Artificial Intelligence's public conference in Washington on Tuesday.

AI has the potential to change the character of war -- together we will get there! Thank you to the National Security Commission on Artificial Intelligence #NSCAI for hosting me for this engaging discussion today. pic.twitter.com/VOWhoXhXvg

​Esper likened the new great powers’ competition to the Cold War-era space race when the United States was initially stunned by the Soviet advances such as the launch of the satellite Sputnik but later caught up in the space race.

The US defence secretary said China had made abundantly clear its ambition to become the world’s leader in AI by 2030.

"China believes it can leapfrog our current technologies and go straight to the next generation… Beijing has all the power and tools to coerce the Chinese industry and academia into supporting its government-led efforts", Esper said.

Esper also said Russia has made its intentions equally clear, calling AI the future of humanity and describing technology as the key to supremacy on the world’s stage.

"We shouldn’t doubt their abilities on the battlefield. We expect Russia to deploy increasingly hi-tech AI capabilities in current and future combat zones", he said.

Esper expressed optimism, however, that no one can compete with the United States when it unleashes its collective genius of industry, government and academia.

Pentagon Warns US Allies Against Hi-Tech Cooperation With China

Esper also warned Tuesday against cooperation with China in the hi-tech domain because such cooperation may have adverse consequences for their partnerships with the United States.

"Cooperation with Beijing has consequences, not just for democracy or human rights but also for the strength of our partnerships abroad", Esper stressed.

Esper warned that turning to Chinese 5G network platforms would inject serious risks into "communication and intelligence-sharing capabilities" between the US and its partners and allies.

"Our collective security must not be diminished by a short and narrow-sighted focus on economic opportunity", Esper said.

The US has been pushing other countries to refrain from using Chinese tech giant Huawei’s equipment when adopting 5G technology. However, Germany has defied Washington’s calls and, according to media reports, decided to grant Huawei access to its high-speed internet market.