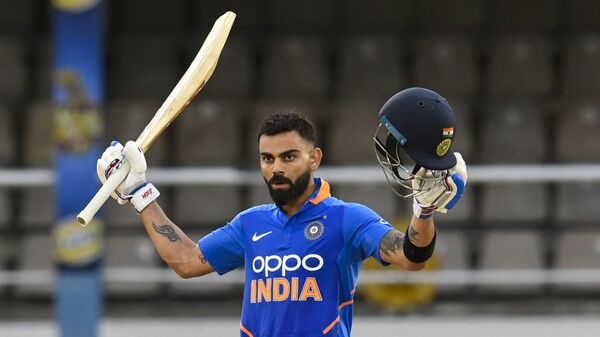 New Delhi (Sputnik): Virat Kohli, who recently became the fastest batsman to score 10,000 runs in One Day International (ODI) matches, is regarded as one of the best batsmen in the world after the "god of cricket" Sachin Tendulkar.

Cricket fans in India took social networking platforms by storm as Indian cricket team captain Virat Kohli, viewed as one of the most prolific batsmen in international cricket by many, turned 31 on Tuesday.

Fans along with cricketing stars including the legendary Tendulkar, Suresh Raina, Harbhajan Singh, Virender Sehwag, Shikhar Dhawan and coach Ravi Shastri among others broke the internet with sentimental wishes for the birthday boy who is fondly called “Chiku” by friends, family and fans.

With nearly 400,000 mentions, #HappyBirthdayViratKohli is trending on Twitter in India. Other hashtags like #HBDViratKohli, #HappyBirthdayChiku and #KingKohli are also floating on social media.

Wishing you a very happy birthday Virat! Continue scoring runs and leading India with the same passion! All the best. pic.twitter.com/DhExlercwC

Happy birthday mere chotte veer @imVkohli modern generations batting master,I wish you all the success on and off the field.. May waheguru continue to bless you with everything..stay happy and healthy.. #HappyBirthdayVirat ❤️❤️ pic.twitter.com/VQxlESr9NV

Many many happy returns of the day @imVkohli. Keep shining brother. 🤗 pic.twitter.com/3W12XuwmcU

May the ball always appear as big as this and may your batting always be like a F5 button, refresh everyone who is blessed to see it. Badalon ki tarah chaaye raho, hamesha khush raho @imVkohli #HappyBirthdayViratKohli pic.twitter.com/32sydYLeRg

#HappyBirthdayViratKohli the best one right now in the world. Redefining the best meaning in cricket world. pic.twitter.com/1AtMrHBSWz

Meanwhile, Kohli took off to the mountains for a birthday vacation with his wife and top Bollywood actress Anushka Sharma.

What a blessing to be able to visit such divine places with my soulmate. Also thank you everyone for your kind wishes from the bottom of my heart. 🙏😇❤️ pic.twitter.com/ww8HfE7o4Z

​On his birthday, the right-handed batsmen gave fans a peek into his emotional side as he penned a letter to his 15-year self and shared it on Twitter.

In the letter, Kohli reminded his younger self to love his late father Prem Kohli and to relish home-made food when he has the time.

My journey and life's lessons explained to a 15-year old me. Well, I tried my best writing this down. Do give it a read. 😊 #NoteToSelf pic.twitter.com/qwoEiknBvA

​Within three hours of its posting, the emotional letter has already evoked nearly 10,000 re-tweets and over 62,000 likes.

Anushka also shared insights of her trip with her husband on his special day in a series of tweets.

Today, during our 8.5 km uphill trek we stopped by a small village on a mountain to pet and feed a baby calf who was born just 4 months ago. While we did that the owner of the house asked us if we were tired and wanted to have a cup of tea ? pic.twitter.com/44sQxD0EiB

​Currently, the Indian captain was rested from the ongoing three-match Twenty20 International (T20I) series against Bangladesh in New Delhi.

Kohli will be back on the cricket field when India hosts Bangladesh for a two-match Test series, starting 14 November in the snack-city of central India - Indore.