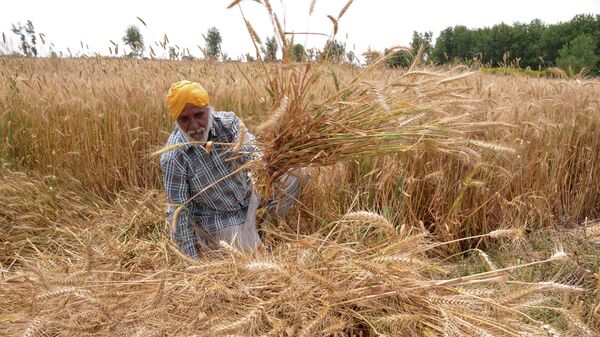 New Delhi (Sputnik): Farmers in India have been holding countrywide protests to convince the government to refrain from signing the world’s largest trade deal, which had the potential of opening up the Indian agriculture market to all15 of the member countries.

While farmers in India congratulated agriculturists for "forcing" the government out of the China-led Regional Comprehensive Economic Partnership (RCEP), trade bodies said the possibility of the industry and service sectors being "compromised" due to this trade pact ended with the government's decision.

The RCEP trade agreement comprises the 10-nation Association of the Southeast Asian Nation bloc (ASEAN) and China, Japan, Australia, South Korea, and New Zealand. The pact implies the reduction or abolition of import tariffs to promote free trade among the signatories of the deal.

While congratulating agriculturists, India's prominent farmers' trade union said it hopes the country would not try any "back-door methods" that would harm the interests of farmers, adding that agriculture should not be brought under the ambit of any free trade deal.

Farmers in India were opposed to the entry of world players into the Indian market, as unions claimed they were ill-equipped to deal with world farmers who receive massive production subsidies in their respective countries.

The leader of the Bharatiya Janata Party farmer's trade union or 'Kisan Morcha, ' Naresh Sirohi, has thanked the government for safeguarding farmers' interests and termed it a "positive development".

Stating that India is an importer country when it comes to agriculture, he said, the agreement would have allowed the export of agricultural products incurring huge loses for the agricultural-based country.

"Highly-subsidised products from countries such as China and New Zealand would have delivered a blow to the sector which is already in loss," Sirohi said.

Agriculture is not a "business" for the country as it employs the majority of the workforce in India, and it's a question of their livelihood, he added.

On the other side, traders and manufacturers dreaded that China, the main force behind the pact, would turn India into a dumping ground for its cheap products, triggering high competition.

"We, at FICCI, fully support Prime Minister Narendra Modi's decision against joining the RCEP, as several of India's concerns remain unaddressed in the proposed deal. Serious apprehensions and reservations regarding the RCEP have been expressed by many sectors including steel, plastics and copper," FICCI President Sandip Somany said in a statement.

"I compliment Prime Minister Narendra Modi for taking a very pragmatic decision towards safeguarding the interests of Indian industry and the country as a whole," he added.

Announcing the decision to stay out of the RCEP, the Indian prime minister on Monday said the deal is "against his conscience".

"Our farmers, traders, and industries have stakes in such decisions. Equally important are the workers and consumers, who make India a huge market and the third biggest economy in terms of purchasing power parity…

"…When I measure the RCEP Agreement with respect to the interests of all Indians, I do not get a positive answer. Therefore, my own conscience does not permit me to join RCEP," Prime Minister Modi said.

He added the present form of the RCEP agreement does not fully reflect the underlying spirit and the agreed guiding principles of the RCEP.

While the other 15 nations decided to go ahead with the deal, Australian Prime Minister Scot Morrison said doors would remain "wide open" for India to join the RCEP, reported Australian Associated Press.

The RCEP negotiators hope to sign the deal in 2020 with the new tariff regime kicking in from 2022.