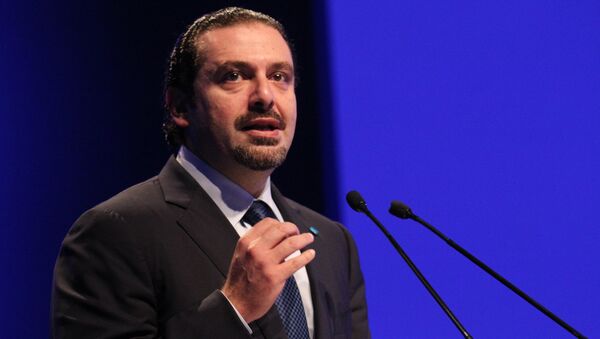 BEIRUT (Sputnik) – Saad Hariri, who resigned from the position of Lebanon’s prime minister amid mass anti-government protests, called on the supporters of his Future Movement party to refrain from holding demonstrations and to work together with the military and security forces.

Media reported late on Wednesday that Hariri's supporters were gathering in various spots across Lebanon's capital of Beirut.

"I thank everyone for their solidarity and once again I am asking the Future Movement to refrain from rallying and to work together with the army and the security forces. This is currently our common goal for the sake of preserving calm and avoiding provocations", Hariri wrote on Twitter late on Wednesday.

Hariri announced his resignation late on Tuesday, which prompted a stop in the mass protests that rocked Lebanon. The demonstrators unblocked roads and cleared off barricades in Beirut. The majority of schools announced the resumption of classes beginning on Thursday. Banks, in their turn, are ready to resume operations on Friday.

On Wednesday, President Michel Aoun asked Hariri to stay on as interim prime minister to allow a new government to form after his cabinet stepped down.

Later that day, the citizens reportedly returned to the streets, calling on the authorities to meet all their demands. The government tightened security measures in the areas where the protesters were gathering.

Jal Al-Dib highway: the army was heavily deployed there during the day and forcibly opened all the closed parts of the highway, yet it is now blocked again by protestors #Lebanon #LebanonProtests https://t.co/7dtDUOy54S

The rallies in Lebanon have been underway for nearly two weeks. They were sparked by the authorities' plan to introduce a tax on online calls made via WhatsApp messenger. The measure was subsequently scrapped. Still, the protests continued amid an acute economic crisis and low living standards, which Aoun said were a result of an economic blockade against Lebanon.