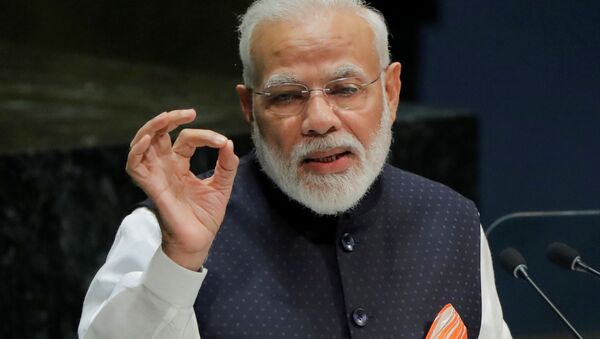 New Delhi (Sputnik): Indian Prime Minister Narendra Modi arrived in Riyadh on a two-day visit on Monday night, his second to Saudi Arabia in three years. In his departure statement, Modi said, New Delhi will sign an “Agreement for the establishment of a Strategic Partnership Council” with the kingdom.

Indian Prime Minister Narendra Modi has revealed that New Delhi is moving towards Saudi Arabia for a strategic partnership including Saudi investment in downstream oil and gas projects.

In an interview with Arab News, he said New Delhi values the “Kingdom’s role as an important and reliable source” of energy requirements.

His Riyadh visit comes at a time when India’s oil inventory has declined, due to suspension of imports from Venezuela and Iran following the introduction of US sanctions on these countries. Last month Saudi Arabia replaced Iraq as the top oil supplier to India.

“Saudi Arabia has been one of the largest and reliable suppliers of India’s energy needs,” said Modi in his statement.

Landed in the Kingdom of Saudi Arabia, marking the start of an important visit aimed at strengthening ties with a valued friend. Will be taking part in a wide range of programmes during this visit. pic.twitter.com/3MskcllePr

​Modi’s visit to Saudi Arabia also comes as the faceoff between India and Pakistan continues after New Delhi stripped the restive state of  Jammu and Kashmir of its special status in early August.

Saudi Arabia has committed to invest over $ 100 billion in sectors of priority in India including in downstream oil and gas projects. Saudi Aramco is also participating in a major refinery and petrochemical project on India’s west coast.

“We value the Kingdom’s vital role as an important and reliable source for our energy requirements. We believe that stable oil prices are crucial for the growth of the global economy, particularly for developing countries,” Modi told Arab News.

The Indian Prime Minister will also launch the RuPay payment card in Saudi Arabia, the third country to implement it. RuPay provides an open and multilateral payment system, facilitating electronic payments at all Indian banks and financial institutions.