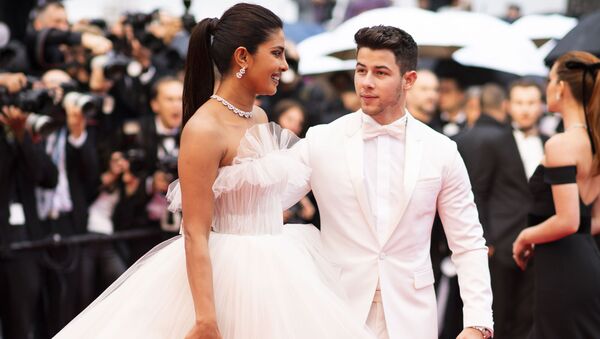 New Delhi (Sputnik): Before Priyanka Chopra took off for Hollywood and went on to marry international pop-star Nick Jonas, she had quite a few rumoured affairs with young Bollywood hot-shots.

Between 2009 and 2012, one of India's sexiest actors Shahid Kapoor was dating Priyanka. Seven years later, when both of the ex-flames are married to their respective spouses, Shahid has advised PeeCee and Nick to "understand each other's backgrounds", The Hindustan Times reported late Thursday.

The 38-year old "Kabir Singh" star spoke about his ex on a chat-show hosted by former Miss India and actress Neha Dhupia.

The romantic relationship between Shahid and the "Quantico" star started when the duo was shooting for a Hindi movie titled "Kaminey".

Even though the couple remained tight-lipped about their relationship back then, the "Kabir Singh" actor recently confirmed his affair with PeeCee during director Karan Johar's popular chat show.

During the interview, Shahid confessed that while his affair with India's "Poo", Kareena Kapoor Khan was long, his romance with Priyanka was a shorter one.

Nevertheless, Shahid has spoken highly of PeeCee on multiple occasions, even after their break-up.

In the last season of Karan's chat show, Shahid advised Nick Jonas to "never back down" because he bagged the "original 'desi girl'" (rooted girl).

In 2016, the now father-of-two kids praised Priyanka acknowledging how well she has been doing.

"Priyanka is doing amazingly well. I am very happy for her. She has made all of us proud. She always had the potential to become an international star, and she has proved it," media quoted Shahid as saying.

Priyanka was crowned Miss World in the year 2000 two years after which the actress debuted in the Hindi movie industry.

My everything ❤️ #karwachauth

The National Award winner stepped into the international entertainment business when in 2015 with "Quantico" when she became the first South Asian to headline an American network drama series.

The 37-year-old actress has since played supporting roles in the Hollywood comedies Baywatch (2017) and Isn't It Romantic (2019).

She returned to Hindi cinema with a leading role in the biopic The Sky Is Pink that was launched globally earlier this month.