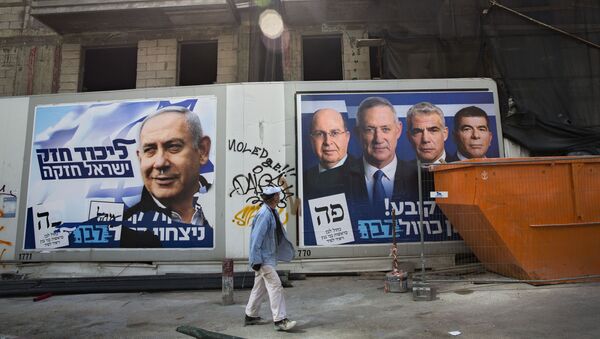 On Monday, Israeli Prime Minister Benjamin Netanyahu returned the mandate to form a government to President Reuven Rivlin after the former failed to form a ruling coalition within the 28-day deadline.

Following the prime minister's move, the Israeli president confirmed via Twitter that he received "Benjamin Netanyahu's announcement that he is returning the mandate to form the government because he was unable to do [so]."

In accordance with the country's law, the president is now expected to transfer the mandate to the second candidate, the chairman of the Blue and White alliance, Benny Gantz, and give him 28 days to build a coalition government.

Meir Litvak, an associate professor at the department of middle eastern history of Tel Aviv University, shares his take on what could happen next.

Sputnik: It has been reported that Reuven Rivlin plans to transfer the mandate to Netanyahu's rival Benny Gantz. How likely is that to happen?

Meir Litvak: Oh…very likely. If Netanyahu fails (which just happened) the president probably will not give him the extension which he can give him by law. It is most likely he will transfer to Ganz. I think it is almost inevitable development.

Sputnik: According to Rivlin, he intends to give Benny Gantz 28 days to form a coalition. Will Gantz succeed in this task?

Meir Litvak: Well, frankly - I don’t know. I don’t think there is much chance for it as long as the Blue and White bloc remains unified. It is possible but not very likely. I hope it will happen, but I cannot say that some members of the Likud or of the smaller parties will prefer the interests of the state over the wrong interest. But to launch the country into another election campaign simply because Netanyahu's personal problems are not solved - and it is both outrageous and harmful - and maybe some of them also believe that it will harm the Likud and their parties. And therefore they will decide if it either goes to Ganz or some other Likud member then they will be able to form a coalition. It is not big chance for this but who knows, maybe it will happen.

Sputnik: What do you think will be the consequences if the next appointee fails to form the government?

Meir Litvak: Then they may face the third election campaign which is very bad from almost every aspect – economic, strategic… It is very, very bad.

Sputnik: What will be the economic and social consequences?

Meir Litvak: Economic – it is very simple there is already a big deficit. Government cannot implement the necessary cuts, it cannot carry out the necessary economic measures that are actually essential to cut the deficit. Which means that deficit growth will continue. These are actually very negative economic consequences. It also means that no money will be given to very urgent projects. So again: my government is barely functioning on the minimum. By the way, federal elections cost a lot of money. And also the question is that the situation in the region is not stable. The country is still busy with elections, and forming necessary policies to confront external tendencies. It is bad in every possible aspect.

Sputnik: The Blue and White party also did not gain a majority - they have 56 mandates. What is the likelihood that they will be supported by the Israel Our Home party?

Meir Litvak: I really cannot tell you. It really depends on what is going on in the minds of one or two leaders. Lieberman decided that he cannot give some kind of support for the government. He relies on a non-Zionist or anti-Zionist party. So far he said he would not do it. When he might do it I cannot tell you, because I don’t know. Or again, he may say that in an emergency he will not oppose such a government and then maybe such a government could survive. It is difficult to say. It is a very bad situation. Maybe, therefore, Lieberman can say “it is okay, third elections is the worst option” and he will support such a government. Maybe he will say that, but I don’t know. Actually I don’t know what is going on in his mind.

Sputnik: Who, in your view, will be the next prime minister?

Meir Litvak: I think it will be very difficult for Netanyahu to continue as prime minister, because I think that unless something very dramatic happens, he will go on trial. By the way, it is also possible that the Council receives a mandate to form a government. If, during the next 28 days, the attorney general decides to send Netanyahu to trial, then [Netanyahu] will not be able to be a candidate anymore. Then Likud will have to choose another person and that person maybe will be going with Ganz. So there is also another possibility. I don’t know who will be the next prime minister, but the chance that Netanyahu will continue to be is not that big.