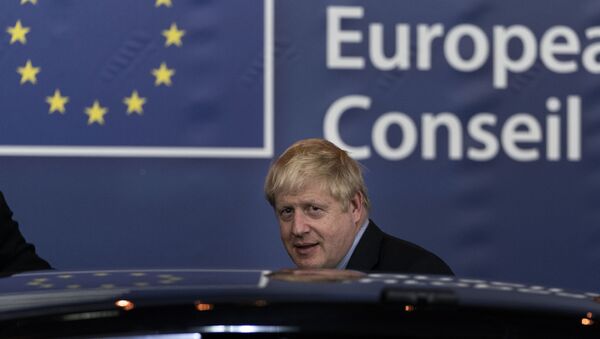 BRUSSELS (Sputnik) – UK Prime Minister Boris Johnson told on Saturday European Council President Donald Tusk that he would send a letter with a formal request for the Brexit delay later in the day, a source in the European Union said.

In a crucial Saturday vote, the UK House of Commons passed the so-called Letwin Amendment to the Brexit plan proposed by Johnson, which stipulates that the approval for the Brexit deal be withheld until the legislation to enact it is ratified. The vote results automatically trigger the Benn Act, passed by the parliament last month, which requires the government to request a delay to Brexit if the lawmakers do not approve the plan by October 19.

“Phone call between Tusk and PM Johnson [took place] at 20h15 [18:15 GMT] this evening. The PM confirmed that the letter would be sent to Tusk today. Tusk will on that basis start consulting EU leaders on how to react. This may take a few days,” the source said.

It will take Tusk "a few days" to consult EU leaders on Brexit delay, an EU official said, according to Reuters.

"Tusk will on that basis start consulting EU leaders on how to react. This may take a few days," the official said.

Later, Donald Tusk has confirmed the receipt of the United Kingdom's request to postpone Brexit, without specifying for how long it is asking to delay the day of it leaving the European Union.

The extension request has just arrived. I will now start consulting EU leaders on how to react. #Brexit

Earlier, Johnson said that he would tell the EU that a further Brexit delay was not a solution and that the bloc might well reject what he said was parliament's request for an extension.