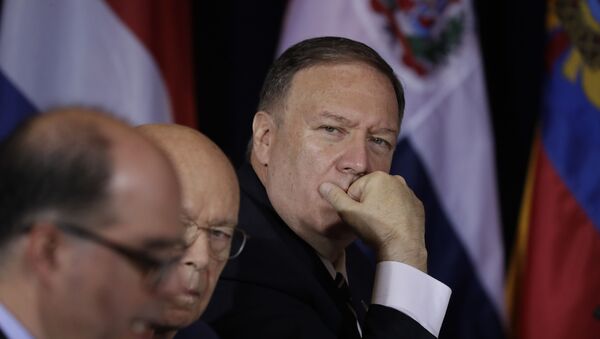 WASHINGTON (Sputnik) - US Secretary of State Mike Pompeo said in a statement that he urged Turkey to get back to dialogue with the United States on security on northeast Syria.

"Spoke with Turkish Foreign Minister Mevlut Cavusoglu yesterday, urging Turkey to halt its military operation and return to a dialogue with the United States on security in northeast Syria," Pompeo said.

On Tuesday, US President Donald Trump signed an executive order authorizing sanctions against Turkey following the launch of Ankara’s military operation in northern Syria. The sanctions cover several Turkish institutions and senior officials, including the Defense Ministry and its head Hulusi Akar, the Energy Ministry and its head Fatih Donmez as well as Interior Minister Suleyman Soylu.

Erdogan announced on October 13 that the Turkish military gained control over the strategic town of Tal Abyad in the Raqqa province.

Numerous countries have criticized Turkey for undertaking the military operation in northern Syria, with a number of countries - including the co-guarantor of the Syrian ceasefire, Iran - calling on Erdogan to immediately stop the military activities and withdraw from the country.

A number of countries, including France, Germany and the United Kingdom, have already embargoed arms exports to Turkey, while others have threatened to proceed with political and economic measures, aimed at halting Turkey's offensive.