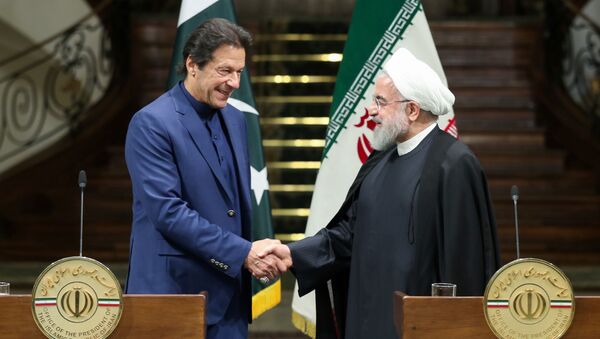 The initial reports about an Iranian oil tanker, the Sabiti, falling victim to two missiles launched from Saudi Arabia were later dismissed as incorrect, although the company owning the vessel confirmed there had been some damage inflicted on the tanker as it sailed across the Red Sea.

During a joint press conference with Pakistani Prime Minister Imran Khan in Tehran on Sunday, Iranian President Hassan Rouhani noted he had expressed his country's concerns about the security of oil tankers, in particular about the latest incident in the Red Sea surrounding an Iranian oil tanker.

According to Rouhani, Tehran “provided the Pakistani prime minister with the clues” that they “have found in this regard", emphasising that they will continue their investigations until they arrive at a final plausible result vis-à-vis “the main factors behind the attack on the Iranian oil tanker".

“It is an absolute mistake for a country to think that it could create insecurity in the region without receiving a response", Rouhani thundered, referring to last week’s purported explosion that set the National Iranian Oil Company's tanker on fire 100 kilometres from the Saudi port city of Jeddah.

Media reports suggested at the time that it could have been a Saudi missile attack, but NIOC, the company that owns the vessel, later dismissed the claims, confirming though that the ship had indeed been damaged.

Referring to the agenda that his talks with the Pakistani PM covered, Rouhani said they discussed a broad range of issues in their meeting, including the necessity of promoting bilateral Iranian-Pakistani economic ties, as well as security along their joint border and a number of other regional issues.

“Iran and Pakistan are two neighbouring and friendly countries with deep strategic relations, and both sides insist that these strategic relations should continue strongly", Rouhani added hailing the negotiations, which centred around the establishment of stability and sustainable peace in the Middle East, "particularly the Persian Gulf and the Sea of Oman” – “a very delicate region of the world".

Rouhani also noted that he has cautioned Pakistan about Israel’s threats to regional security, stressing he “also made it clear to Pakistan’s prime minister that “any act of goodwill and appropriate words would receive an appropriate and decent response as well".

He notably lauded the politician’s goodwill and preparedness to mediate peace in regional conflicts, noting that Tehran would facilitate efforts aimed at the restoration of peace in the “delicate” region.

Rouhani specifically brought up the US sanctions directed against Iran, branding them an act of “economic terrorism” and stressing that he and Khan, who has now been to Iran for a second time over the past six months, discussed possible means of putting the landmark 2015 JCPOA deal back on the right track, which would include the bringing the US back into the fold.

“We also emphasised the basic and key point that in order to settle the problems, the US must return to the JCPOA and abandon the sanctions".

Separately, after Iran, Pakistani Prime Minister Imran Khan was scheduled to pay an official visit to Saudi Arabia later on Sunday, as part of mediation efforts aimed at easing tensions in the Gulf region.