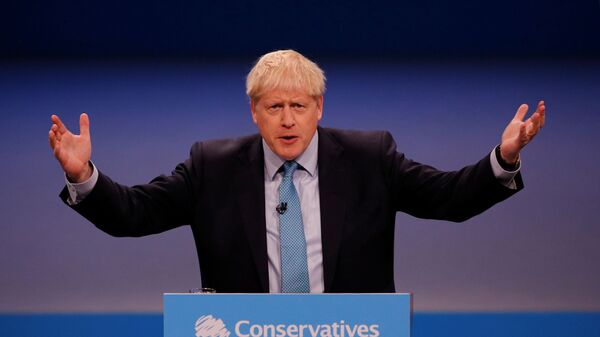 The British government has put its revamped Brexit deal to parliament, after already having presented it to the EU’s powers that be. Dr Connal Parr, Lecturer in History at Northumbria University, expressed his views on the issue.

Dr Connal Parr: In terms of the EU; there is something interesting about these plans, I don’t think they are as bad as doomed to fail as many people have said and predicted, the EU actually used the phrase that there had been advances, and there is enough to suggest that there is potential for something, but not enough.

It could be a case of too little, too late. The clock has ticked down and we are so close to the deadline and it seems to me that there would have to be a huge amount of work to get through before a deal could be reached in terms of the EU accepting this, I still think that’s likely, and given the sounds coming from Irish Taoiseach Leo Varadkar, that the new plans didn’t fully meet the agreed objectives of the backstop, so he is sticking pretty close to that from his statement, so that would suggest that the EU would follow Varadkar and what he says on that point.

Westminster is a bit different. A lot of Conservatives who didn’t support Theresa May’s deal have indicated their support for this, as have the DUP. Again; the Labour Party, the SNP and Liberal Democrats are a different kettle of fish, but there may be enough turncoats if you like on the Labour side to get behind it in parliament.

So I suppose what I am saying is that in In Westminster this could actually narrowly pass a vote.

Dr Connal Parr: The prospect of Jeremy Corbyn winning a general election in any situation is quite remote. Just in terms of the forces that are rallying against the Labour Party, and there is still a situation that they face a kind of Murdoch press in every election.

Corbyn himself remains unconvincing as a leader to a lot of people, Brexit or no Brexit and I think he’s not completely capable of winning over middle England constituencies and enough marginal seats to win an election, in any situation.

What I think his strategy is, is that he knows that if an election had been held this month; would have been quite a strong Conservative victory, so what Corbyn is banking on is that you delay the election until after this Brexit deadline, as it is commonly accepted that Brexit is happening and what Corbyn is hoping for is to have the election after this happens, or after a no-deal happens, and that there will be enough problems and temporary chaos from the economic situation, that there will be enough people to back Labour and take over from the Tories.

Sputnik: Will the EU reform after Brexit?

Dr Connal Parr: Aside from lip service; I don’t know if the EU is actually thinking of reforming itself too much. Their conduct and rhetoric during this whole process has not indicated that they have much in the way of willingness to learn from their problems which do exist in the EU and have made for some unhappy internal situations, with the UK obviously being the biggest example of that.

Unless there is somebody behind the scenes who is willing to make very drastic reforms and changes within the EU structures; there doesn’t seem to me to be much evidence that any of the proposed changes amount to much, and if anything there’s been a sense still if you are lucky to join this club, and we back the way they function, that the EU backs its internal members, and you see how it’s got behind Ireland, and you have to say that these practises are very ingrained.

The EU believes that their record and the benefits of being in it, so far outweigh the minor negatives as they would see it, and that they don’t actually need to change all that much.