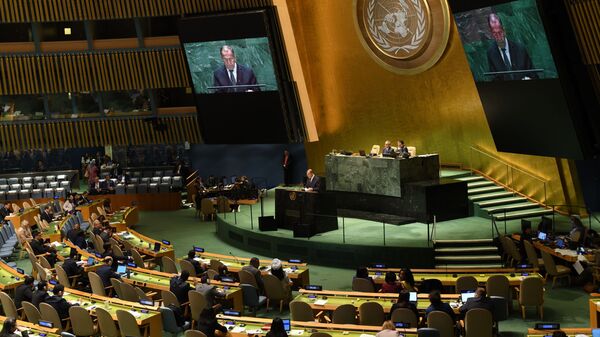 © Photo : POOL
/
Go to the mediabank
Subscribe
International
India
Africa
UNITED NATIONS (Sputnik) - The United Nations is greatly concerned about the practice of the United States to deny visas to members of the Russian delegation scheduled to participate in the UN General Assembly, spokesperson Stephane Dujarric said at a press briefing on Thursday.

"We are very much concerned about the matter," Dujarric told reporters. "The issue was brought to attention by the Russian Federation."

Dujarric said the issue of the United States denying visas to Russian diplomats was also discussed by the UN General Assembly's Committee on Relations With the Host Country on Wednesday.

Last week, Russia's Foreign Ministry said it might advocate for the relocation of the UN headquarters after the US refusal to grant visas to 10 members of the Russian delegation at the UNGA. Russia's Foreign Minister Sergei Lavrov said that Moscow can't leave the situation surrounding the visa denial "without response."