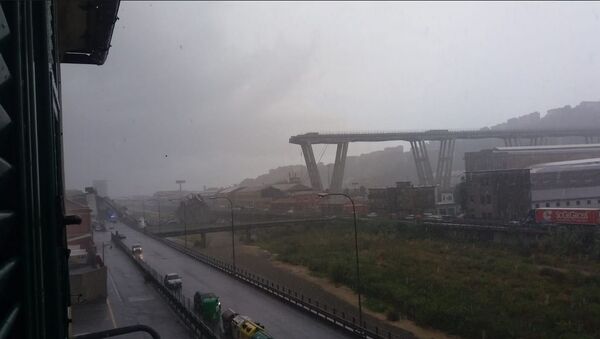 GENOA (Sputnik) - Work on the new Genoa bridge that will replace the Morandi bridge, which collapsed in August 2018, is already at full speed, but opening it ahead of schedule is unlikely, Pietro Salini, CEO of the Salini Impregilo company, which is constructing the bridge, said.

"We will respect the program. Every day some new issue to solve arises – some days more, some days less. But nothing in the construction team can be better than what we already have, because there are no magicians. The program is already very tight to respect it," Salini said, when asked whether the new bridge would be opened ahead of schedule.

On Tuesday, the first platform was placed on the first two pillars of the viaduct. Prime Minister Giuseppe Conte, Minister of Infrastructure and Transport Paola De Micheli, and Mayor of Genoa and Extraordinary Commissioner for Reconstruction Marco Bucci were present at the event, among other officials.

Parents of the victims also attended the event. The tragedy of the 14th of August 2018 took 43 lives.

"The alignment is the same, but the connection is different, it is much safer. Also, the new bridge will be much faster," Salini added.

The other 18 platforms will be lifted in the coming months.

Salini Impregilo and Fincantieri Infrastructure were awarded the contract to re-build the famous bridge, which is located in the Italian city of Genoa. The companies chose the PERGENOVA company for the reconstruction. The project of some 200 million euros ($218 million) is set to re-build the bridge in 12 months. The last pillars of the Morandi bridge were removed in April, making the new Genoa Bridge expected to become fully operational by April 2020.