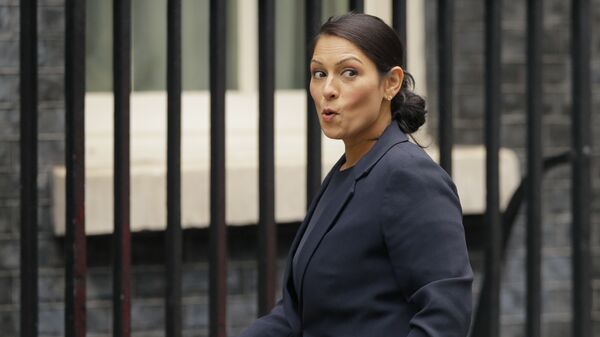 Home Secretary Prit Patel has given a speech about law and order at the Tory conference in Manchester but it was overshadowed by a rumpus involving a Conservative MP.

Geoffrey Clifton-Brown, 66, Treasurer of the 1922 Committee, was reportedly involved in an altercation with a delegate in the International Lounge at the conference.

​Journalists were banned from the lounge after an “incident” although Tory MPs queued up to play it down.

Ms Patel said one of her first acts as Home Secretary was to recruit 20,000 new police officers and drew a veil over the number of officers whose posts had been cut since 2010.

She said: “The Conservative Party is the party of law and order once again. We stand with the brave men and women of the police and security services. We stand against the criminals, drug dealers, thugs and terrorists who seek to do us harm.”

​Ms Patel said: “We are the party who have always backed the forces of law and order and we always will.”

She later turned to the subject of Brexit.

Ms Patel, who supported the Leave campaign at the 2016 referendum, said the Tories were trying to "get Brexit done" and deliver the will of the people.

"A group of politicians, led by Jeremy Corbyn, think they know better and have done everything they can to defeat democracy," she said.

Ms Patel said they would introduce a skills-based immigration quota, which would be independent of the European Union.

​She railed at the "north London metropolitan liberal elite" - including Remainer journalists and politicians like Diane Abbott, Jeremy Corbyn and Emily Thornberry - and got a round of applause when she namechecked the former Conservative Prime Minister Margaret Thatcher.