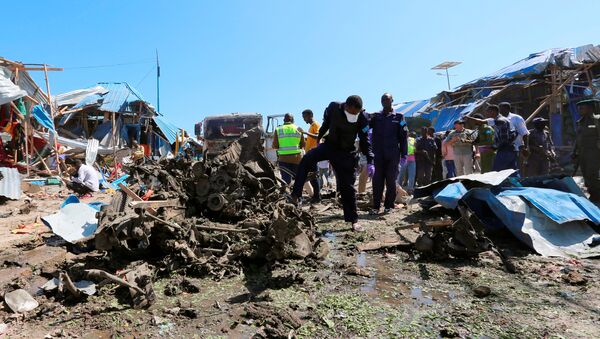 Earlier this year, two explosions occurred near the parliamentary building and a busy intersection on the road to the international airport in Mogadishu, leaving at least nine dead and 25 injured.

A car was blown up in an alleged suicide attack near a group of foreign troops in the Somali capital of Mogadishu, while another car bomb was detonated at the gate of a military airstrip that serves as a base for US and Somali forces, according to the Fox News media outlet.

According to reports, the first explosion occured at the moment when an Italian military convoy appeared next to the car in Mogadishu. No casualties have been reported.

The second attack targeted a military airstrip which serves as a base for US and Somalia forces in the Lower Shabelle region of southern Somalia.

A suicide bomber blew up a vehicle wired with explosives at the gate of the Belidogle airstrip, according to Yusuf Abdourahman, a security official.

United States Africa Command is working to confirm the details of a reported terrorist attack on a US military base in the Somali town of Baledogle, a spokesperson for AFRICOM said on Monday.

"AFRICOM is aware of the social media reports, and is monitoring the situation," the spokesperson said. "We are working to confirm details on the incident and will have more information as soon as we can confirm facts on the ground."

Militants from al-Shabaab, an al Qaeda-linked terrorist group, have claimed responsibility for the attack.

Al-Shabaab reportedly emerged in Somalia in 2006. Somalia has been engulfed in violence since the eruption of a civil war between clan-based armed groups in the early 1990s.

Al-Shabaab has been staging numerous attacks across the country in an attempt to impose Sharia law.