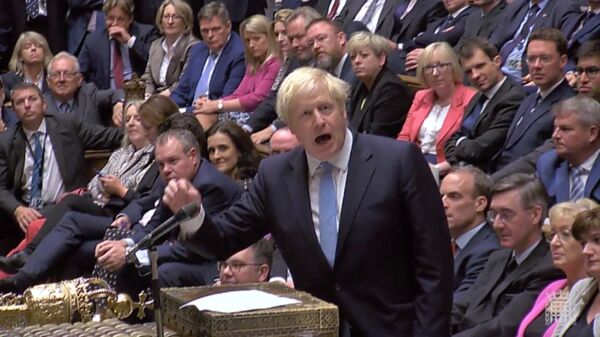 © REUTERS / Parliament TV
Subscribe
International
India
Africa
Ilya Tsukanov
All materialsWrite to the author
Johnson arrived back in the UK on Wednesday from New York, where he addressed the United Nations. The prime minister has faced calls to resign a day after the UK Supreme Court ruled that he had acted unlawfully by suspending parliament.

The UK's parliament is paralysed, Prime Minister Boris Johnson has declared, reiterating that it was "time to get Brexit done."

"I want Brexit done and people want us out on October 31, with a new deal if possible, but without one if necessary," Johnson said, as a stream of screams, boos and shouts of support echoed through parliament.

Johnson challenged Labour and smaller parties to vote to call a confidence vote "and finally face the day of reckoning with the voters" if they didn't want to move forward with Brexit, and accused the opposition of "doing its best to wreck our negotiations by their attempts to take no deal off the table."

"The people at home know that this parliament will keep delaying, it will keep sabotaging the negotiations, because they don't want a deal," Johnson said. The prime minister accused the opposition of living in a state of "extraordinary delusion" over its plans to hold a second referendum, saying the will of the public from the 2016 referendum must be respected.

"We can have that vote tomorrow, or if any of the other parties, the smaller parties fancy a go, they can table that motion and we'll give you the time for a vote. Will they have the courage to act, or will they refuse to take responsibility, and do nothing but dither and delay?" Johnson asked.

Johnson called the Supreme Court's intervention in the Brexit issue a mistake, and said the court was "wrong to pronounce on what was essentially a political question at a time of great national controversy."

Labour leader Jeremy Corbyn called Johnson's speech "ten minutes of bluster from a dangerous prime minister who thinks he is above the law, but in truth Mr. Speaker, is not fit for the office which he holds."

Corbyn said he was happy to see the parliament back in session following the government's multiple "failures," including its "chaotic Brexit negotiations," and its alleged "attempts to shut down democracy."

"Yesterday's Supreme Court verdict represents an extraordinary and I believe precarious moment in this country's history. The highest court in this land has found the prime minister broke the law when he tried to shut down our democratic accountability at a crucial moment in our public life," Corbyn said. "After yesterday's ruling, the prime minister should have done the honourable thing and resigned."

Earlier in the day, Attorney General Geoffrey Cox called the nation's parliament a "disgrace" for failing to pass Brexit or even call a vote of confidence in the prime minister.

Cox, the Conservative government’s chief legal adviser, alleged that the “dead Parliament" was "too cowardly" to vote for a no-confidence motion, knowing it would trigger an early general election.

​He said: "This Parliament should have the courage to face the electorate but it won't, because so many of them are really all about preventing us leaving the European Union. But the time is coming. The time is coming, Mr. Speaker, when even these turkeys won't be able to prevent Christmas."

As Michael Gove calls Boris Johnson the “Pep Guardiola of British politics”, observers point out Pep has actually had a positive impact on Sterling.

​The opposition Labour Party has refused to agree to an early election until it can be sure Johnson is unable to railroad through a “no deal” Brexit.

Labour MP Barry Sheerman accused Cox of having "no shame at all." Amber Rudd, who had been a Cabinet minister up until two weeks ago, urged Cox to "cease this language of pitting Parliament against the people."

We should ALL be as angry as @BarrySheerman.

The @CONservatives are a disgrace.pic.twitter.com/NjN79YC6LZ

Johnson became leader of the Conservative Party in July and promised Britain would leave the European Union by 31 October, with or without a deal.

After the Supreme Court ruled against him on proroguing parliament, he said he "strongly" disagreed with the 11 judges, headed by Lady Hale, and suggested he might try to suspend parliament for a second time.

Geoffrey Cox, you have probably seen, has gone absolutely wild. His thesis, in the main, is that “the opposition won’t let the government govern.”

Corbyn earlier told the BBC: "He should apologise to her (the Queen) for the advice he gave her but, more importantly, apologise to the British people for what he's done in trying to shut down our democracy at a very crucial time when people are very, very worried about what will happen on 31 October.”

On Tuesday, 24 September, Labour passed a motion at its party conference calling for a new referendum six months after a general election on whether or not to approve a negotiated deal or to Remain in the EU.

In parliament on Wednesday, Cabinet Minister Michael Gove suggested that "Labour's position on Brexit is as solid as a blancmange in a hurricane."