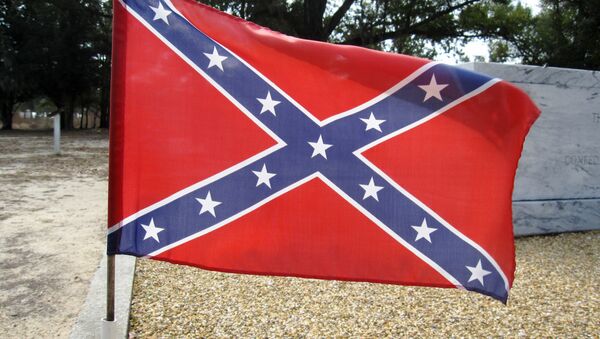 CC BY 2.0 / Edward Stojakovic / Confederate Flag
Subscribe
The police officer claimed that if the people who discovered the Confederate and KKK paraphernalia at his home contacted him directly, he would have explained the situation to them and apologised.

A white police officer in Michigan who ended up being fired after a collection of Confederate memorabilia and a framed KKK application were discovered in his residence, defended his possession of said objects by claiming that he’s an avid history lover and a fan of a popular TV show from the 1980s, Detroit Free Press reports.

According to the media outlet which cites a 421-page report released by Muskegon City Manager Frank Peterson and the city attorney's office, a black couple named Robert and Reyna Mathis toured the house belonging to the police officer, Charles Anderson, as the residence was put up for sale at the time, when they discovered numerous Confederate flags there and a framed KKK application on the wall, with Robert later posting the picture of the latter object online.

During a subsequent interview with the city, Anderson did admit that he “has a Confederate flag hanging in his garage, a Confederate flag-decorated hot pad on his dining room table and a framed, blank copy of a KKK application from the 1920s.”

In his defense, Anderson explained that the flags were in fact a part of his "Dukes of Hazzard" collection - referring to the eponymous TV series set in a fictional southern county and featuring the main characters driving a Dodge Charger called “The General Lee” – and that he bought the KKK application about six years ago in Indiana because he has a keen interest in the US history from the late 1800s to the 1960s and likes to collects antiques from that time period.

He also added that if Mr. and Mrs. Mathis contacted him directly about the items, he would’ve explained the situation to them and apologised.

Many social media users, however, did not seem to trust Anderson’s explanation and promptly proceeded to mock him.

Wife: What is this?!

Me: I’m a huge fan of the movie Showgirls and I like collecting related memorabilia.