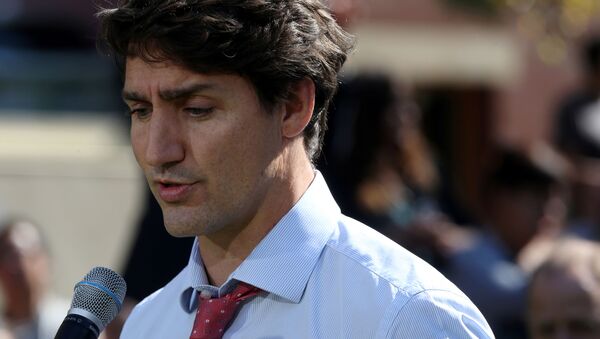 Canadian PM Justin Trudeau has recently found himself in hot water after several pictures and a video of him wearing blackface makeup were obtained by the press. Blackface is believed to be a symbol of racial stereotypes and is often considered offensive to minorities.

The first photo with Trudeau wearing blackface during a costume themed “Arabian Nights” party that dates back to 2001 was published on Wednesday. Several other pictures and a video of the Canadian PM wearing blackface makeup emerged later on Thursday, forcing Trudeau to call a press conference to address the new revelations and once again apologise for his “microaggressions” towards minorities.

​During the press conference, however, Trudeau could not confirm that there were no more occasions in his life, apart from those three, where he wore blackface, saying that he could not remember even those pictures that had been obtained.

“It is obvious that this is something that was deeply regrettable", Trudeau said when answering a question from Canadian Press reporter Teresa Wright about whether he remembered the number of instances he wore blackface, “I am wary of being definitive about this because the recent pictures that came out, I had not remembered".

“And the question is, ‘How can you not remember that?'” Trudeau asked himself, without giving an answer.

“The fact is, I, I didn’t understand how hurtful this is to people who live with discrimination every single day. I have always acknowledged the fact that I come from a place of privilege, but I now need to acknowledge that that comes with a massive blind spot", the Canadian PM continued by offering his apologies to the public.

The firestorm surrounding Justin Trudeau started on Wednesday when a photo of him wearing brownface while portraying the character of Aladdin in 2001 was published by TIME magazine. Then some pictures of Trudeau wearing an afro wig and blackface in a parody of Jamaican artist Harry Belafonte at a school talent show were also obtained by the press and published online. The video published on Thursday morning also featured someone resembling Trudeau while wearing blackface, revelations the Canadian PM did not deny.

Justin Trudeau has previously criticised Donald Trump for “wrong and unacceptable” comments towards the leftist Democrat politicians branded the “squad”, while praising Canada’s progressiveness and tolerance.

“That is not how we do things in Canada. A Canadian is a Canadian is a Canadian. The diversity of our country is actually one of our greatest strengths and a source of tremendous resilience and pride for Canadians and we will to continue to defend that", said Trudeau back in July, while addressing Trump’s comments about the “squad” going back to their home countries.