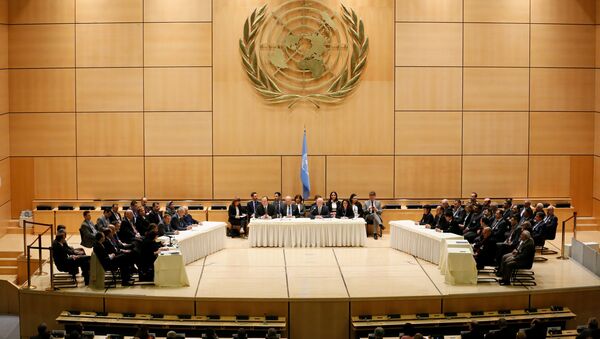 Russian President Vladimir Putin, Turkish President Recep Tayyip Erdogan, and Iranian President Hassan Rouhani, the heads of the three guarantor states of the Astana peace process for Syria, discussed the formation of a Syrian Constitutional Committee when they met for a summit in Ankara earlier in September.

The UN Security Council could vote on two competing resolutions calling for a cessation of hostilities in Syria’s northwest, including a draft resolution submitted by Russia and China. In August, the "humanitarian troika" comprising Germany, Belgium, and Kuwait proposed a draft resolution urging for a ceasefire in Syria’s north-western regions and ensuring access to aid organisations there.

For a resolution to be passed by the council, it requires nine votes in favour and no vetoes by the five permanent member states - Russia, the United States, China, France, and the United Kingdom.

Russia, Turkey, and Iran are guarantors of the ceasefire in Syria. Russia carries out humanitarian operations across the country on a regular basis and helps Damascus provide safe passage for the return of Syrian refugees.

By late 2017, the Syrian government had regained control over most of the territories that were seized by terrorists; however, anti-terror operations are still ongoing in a number of areas.