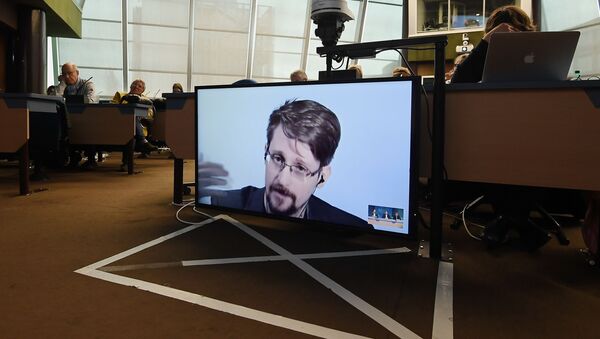 © AFP 2021 / FREDERICK FLORIN
Subscribe
Egor Efimchik
All materials
The French government reportedly distanced itself from the minister’s comments, as allowing Snowden into France would likely stir up a row with the United States, which wants him to stand trial on espionage charges carrying at least 30 years in jail in total.

A top French official has supported the idea of granting political asylum to US whistleblower Edward Snowden, who has been living in exile for the past six years after leaking incriminating secret documents on the US government’s mass surveillance efforts.

“Yes, good. I back it,” France’s Justice Minister Nicole Belloubet replied, when pressed for her opinion on such a move on the radio programme Le Grand Jury on Sunday.

She cited the French constitution, which grants refugee status to whoever is “persecuted because of his/her actions in support of liberty”.

“I believe that we should remain faithful to our strong principles on immigration, we must accept asylum seekers,” she added.

According to the radio network RTL, which organised the show, the French government specified that it was her personal opinion and not an official stance.

A Request to Macron

Speaking to French broadcaster the day before, Snowden said that he had applied for political asylum in France in 2013, when President Hollande was in office. He didn’t reveal why he didn’t end up taking refuge in France, but said he was hopeful that the incumbent president, Emmanuel Macron, would grant him asylum.

“We do not want France to become like those countries you do not like,” he said. “The saddest thing about this story is that the only place where an American whistleblower has the opportunity to speak is not in Europe but here [in Russia].”

Snowden, a former National Security Agency contractor, fled the United States in June 2013 fearing prosecution. His disclosures, which revealed the industrial-scale surveillance practices of the NSA and America’s allies, could see him sent to jail for 30 years on charges of espionage and stealing government property (Snowden hoarded the secret documents on an abandoned computer before handing them over to journalists).

Snowden had his passport revoked shortly after leaving the US and eventually settled in Russia, where he was granted asylum. His current residence permit, which has been extended in the past, is valid until 2020. The whistleblower’s memoir, titled Permanent Record, will be released globally on Tuesday.

000000
Popular comments
If I were Edward, I'd stay in Russia. Much safer there than in a NATO country.
Fairgo
16 September 2019, 11:03 GMT4
000000
Snowden has polarized too may people, there is no way he can walk the streets of Europa safely. Furthermore, the public cowardliness of Europe´s politicians has degraded his public standing at lest on a subconscious level. There are 100 "Oswalds" out there ready to take his life. If Snowden walks the streets of Paris, he will end up like JFK.