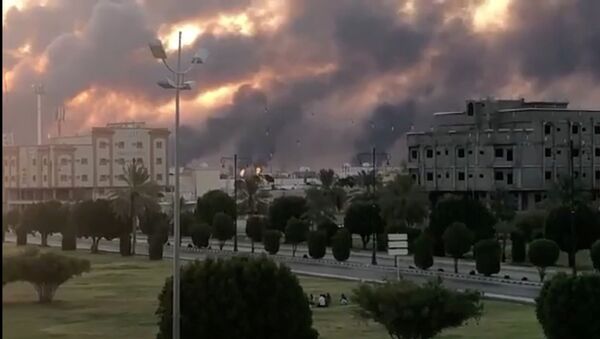 Russian President Vladimir Putin has been kept up to date on the events surrounding the Houthi drone attacks on two major Saudi energy facilities, and Russia believes such incidents will not contribute to the stabilisation of the global energy market, presidential spokesman Dmitry Peskov has said.

"The drone attacks on Saudi Arabia's oil infrastructure are an alarming event for the oil markets...Of course, such turbulence does not contribute to the stabilisation of the energy market," Peskov said, speaking to Russia's Vedomosti newspaper on Sunday.

According to Peskov, the Saudi side has not appealed to Russia for assistance in the wake of the attacks, and probably has the necessary capacity to deal with the disruption on its own. "We don't know whether they need help, but it's unlikely. They have all the necessary capabilities themselves," he said.

Peskov noted that the Kremlin would "strongly condemn" Saturday's incident, if it could be confirmed that the Saudi Aramco facilities were attacked by drones.

Saturday's attacks, thought to have temporarily crippled about half of Saudi Arabia's daily output of 12 million+ barrels, has led to concerns about what impact they will have on world oil prices. Earlier Sunday, White House advisor Kellyanne Conway told Fox News Sunday that the US was prepared to tap into its Strategic Petroleum Reserves, if necessary, to rebalance the global energy supply in the wake of the attacks.

Earlier Sunday, the European Union's foreign policy service issued a statement condemning the drone attacks, saying they posed a "real threat" to regional security, and suggesting that "at a time when tensions in the region are running high, this attack undermines ongoing work at de-escalation and dialogue." Brussels stands in solidarity with Saudi authorities and the Saudi people, the statement added.

Following yesterday’s attack by drones on two ARAMCO oil facilities in Saudi Arabia, it is important to clearly establish the facts and determine responsibility for this deplorable attack. 🇪🇺 EU repeats its call for maximum restraint and de-escalation 👇 https://t.co/kOIzhlYFGF

Just spoke to @SecPompeo about this egregious attack on the security of Saudi Arabia. This was a reckless attempt to damage regional security and disrupt global oil supplies. The UK condemns such behaviour unreservedly.

"These actions can only worsen regional tensions and risk of conflict," the ministry said, adding that "it is imperative that they stop."

Earlier Sunday, Iran dismissed US Secretary of State Mike Pompeo's claim that Tehran was responsible for the Houthi attack, with Iranian Foreign Minister Mohammad Javad Zarif accusing the US of switching to a strategy of "maximum deceit" after "failing" with its earlier policy of "maximum pressure."

Later in the day, Iranian Foreign Ministry spokesman Abbas Mousavi reiterated Iran's non-involvement in the attacks, and accused Pompeo of making "fruitless and blind accusations" which are "incomprehensible and meaningless."

"Such remarks...are more like plotting by intelligence and secret organisations to damage the reputation of a country and create a framework for future actoins," Mousavi warned.

The Houthis, the Yemeni militia group engaged in a military conflict against a Saudi-led coalition in Yemen, claimed responsibility for Saturday's attacks, saying they used 10 drones to hit the two major Saudi energy facilities, and warning that they would continue further attacks as long as the Saudi-led war in Yemen continues. Saturday's drone attacks hit Abqaiq, a major refinery in Saudi Arabia's Eastern Province, and a large oil processing facility east of Riyadh. Saudi Energy Minister Prince Abdulaziz bin Salman later said the brazen attack had interrupted the production of some 5.7 million barrels of crude oil, as well as two billion cubic feet' worth of petrochemical compounds.

The Yemeni militia has stepped up its drone and missile attacks against targets across Saudi Arabia in recent years, with Riyadh and Washington accusing Iran of providing the Houthis with advanced weapons and support. Iran has repeatedly denied the claims, pointing to the Saudi-led coalition's tight blockade against the country, which it said makes such aid impossible. Saudi Arabia and a coalition of mostly Gulf allies plus Egypt began an operation in Yemen in 2015 in an attempt to restore the government of Yemeni President Abdrabbuh Mansur Hadi after his ouster in 2014.