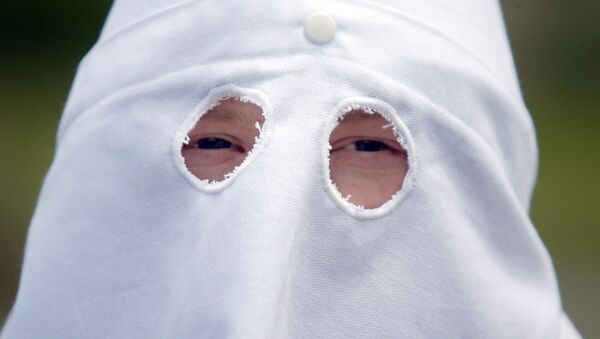 © AP Photo / Matt Houston
Subscribe
A Michigan police officer has been booted from the force following a month-long investigation into Ku Klux Klan (KKK) and Confederate-era memorabilia that was reported to be on full display in his home.

Charles Anderson, a 22-year veteran of the Muskegon Police Department, was relieved of his duties on Thursday after city officials concluded an inquiry into whether his reported possession of KKK and Confederate items violated city policy, according to Muskegon City Manager Frank Peterson.

The investigation began last month after Rob Mathis, a black man, saw a number of Confederate-era items on display in Anderson’s home during a real estate tour.

In an interview with Michigan Live (MLive), Mathis said that upon first seeing all the Dixie items, including flags and placemats, he thought, “Wouldn’t it be funny if this was a Klansman’s house?”

Soon after, Mathis found himself face-to-face with an unsigned application to the “Knights of the Ku Klux Klan,” which was mounted on the wall for all potential home buyers to see. Stunned by the presence and seemingly proud display of the item, Mathis took a photo of the framed application, which managed to catch the attention of Muskegon officials after it gained traction on social media.

“I immediately stopped my walk-through and informed the realtor that I am not writing an offer on this home and I am leaving now. I feel sick to my stomach knowing that I walk to the home of one of the most racist people in Muskegon hiding behind his uniform and possibly harassing people of color and different nationalities,” Mathis said in a Facebook post on August 7.

Though not many details were released following the month-long investigation into Anderson’s odd collection of Confederate and KKK memorabilia, Muskegon Police Chief Jeffrey Lewis noted in an August 27 announcement that there was no “smoking gun” or further incriminating evidence found within the officer’s home, reported MLive.

“But I can tell you this, after reviewing this - and it was a quite lengthy investigation - what you saw on social media pretty much stands the way it is,” Lewis said late last month, referencing Mathis’ Facebook post.

Mathis told MLive that while he is pleased to hear about Anderson’s dismissal, he thinks it unlikely that it will move the needle regarding prejudice within the Muskegon Police Department.

“There are other officers within the police force that have been to Anderson’s home and were well aware of the Confederate flags,” Mathis told the outlet on Thursday. "[Officers who] contributed to that behavior, instead of saying, ‘We as a police force are supposed to have good attitudes when making decisions for our community.’”

Though Anderson has lost his job following the end of the investigation, it may not be the last inquiry to result from the episode. Muskegon County Prosecutor D.J. Hilson told MLive that the former officer’s past conduct may be reviewed, specifically in relation to his 2009 killing of Julius Johnson, a black man, during a traffic stop.

Anderson was previously ruled to have been “justified in using deadly force” following an investigation, but the case may get a second look, depending on the details provided to Hilson in the coming week.

000000
Popular comments
Sure. A nigger cop pisses on a 12 year old and no one bats an eye. But a cop with a framed KKK certificate shows up and everyone loses their minds. Become an agent of chaos.