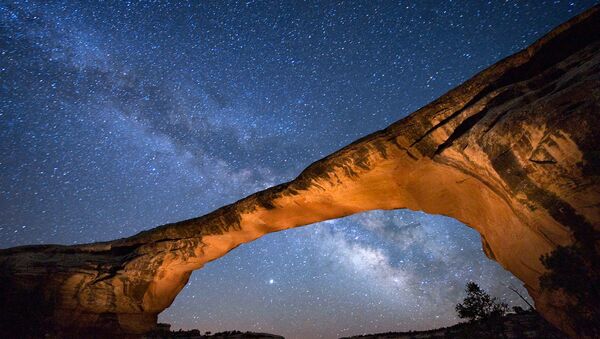 The Milky Way's central black hole is known to be super-active at times, swallowing large bulks of dust and gas and thereby triggering intense outbursts that luckily can be captured today with the high-resolution South Africa-based MeerKAT telescope.

An international group of astronomers, including Farhad Yusef-Zadeh from Northwestern University in the US state of Illinois, has spotted a pair of the most massive structures ever witnessed in the Milky Way – giant bubble-like objects emitting radio signals and essentially dwarfing all the rest of the objects in the central region of the galaxy.

The bubbles, which come together resembling an hourglass in their shape, are likely the result of a super-intensive burst that is thought to have occurred in the vicinity of the Milky Way's supermassive black hole Sagittarius A millions of years ago.

"The centre of our galaxy is relatively calm when compared to other galaxies with very active central black holes", said Ian Heywood of the University of Oxford, the first author of the study.

"Even so, the Milky Way's central black hole can -- from time to time -- become uncharacteristically active, flaring up as it periodically devours massive clumps of dust and gas. It's possible that one such feeding frenzy triggered powerful outbursts that inflated this previously unseen feature", Heywood explained, summing up the reasons for the cosmic bubble show, with the results of the study published in the journal Nature on 11 September.

The Milky Way's immediate surroundings have long been shrouded in mystery, due to its extremely turbulent nature, as compared to the rest of the galaxy.

Northwestern's Yusef Zadeh, a senior author of the paper, has dedicated his career to studying the physical processes that occur in the Milky Way's centre namely highly organised magnetic filaments – radio structures reaching tens of light-years in length and at least one light-year wide. However, it is with the help of the South African Radio Astronomy Observatory (SARAO) MeerKAT telescope, the largest science project in Africa, that the latest discovery has been made possible.

Meanwhile, black holes and the environment around them are expected to underlie a series of real-time movies, with the cinematic breakthrough expected to become a reality in 2020. The films will detail how massive clouds of gas are indefinitely sucked into the pitch-dark void. The recorded materials at the disposal of the scientists come as a result of decades-long observations of dark matter and black holes.