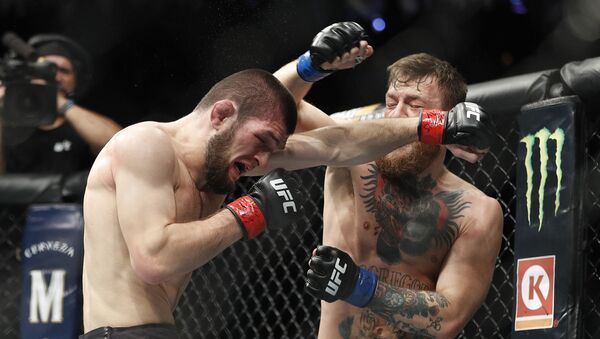 In a short interview with TMZ Sports after a Saturday fight, Khabib’s manager Ali Abdelaziz confirmed that there would be no rematch between the Russian fighter and Conor McGregor, saying the chance that a bout would happen was “0.00%”.

The comment came following McGregor’s Tweet after Nurmagomedov’s victory over Poirier, when the Irish fighter dared Khabib to agree to repeat match, writing “book my rematch for Moscow”.

Abdelaziz rejected the possibility of a rematch ever happening, comparing McGregor to "a bitter ex-girlfriend" who "can't get anybody else" and going on to conclude that the Irish fighter was "irrelevant".

"Conor, who cares?" Abdelaziz said in an interview. "For what? We already beat him; we already whooped his a**".

While referring to the October 2018 brawl between Khabib and McGregor in Las Vegas that got the Russian fighter suspended for nine months, Abdelaziz argued that McGregor was not a good person, as he was promoting "ugliness" with his actions and insults.

Khabib's manager also cast doubt on the previously expressed idea that after Saturday's fight in Abu Dhabi the Russian fighter was likely to move on to the next challenge with US mixed martial arts fighter Tony Ferguson, arguing that a fight with two-division UFC champion Georges St-Pierre - known as GSP - would be more prestigious.

"Georges St-Pierre is next", said Abdelaziz. "That's what I want … I know Georges wants to fight Khabib".

"If Khabib wants to fight for legacy, a fight with GSP would be a huge fight … It would be great to see two legends fighting each other".

Saturday's victory became the 28th consecutive win for Nurmagomedov, making him the longest undefeated fighter in MMA history. While Georges St-Pierre is a retired Canadian mixed martial artist, he became a legend by claiming a championship in two UFC welterweight and middleweight divisions.