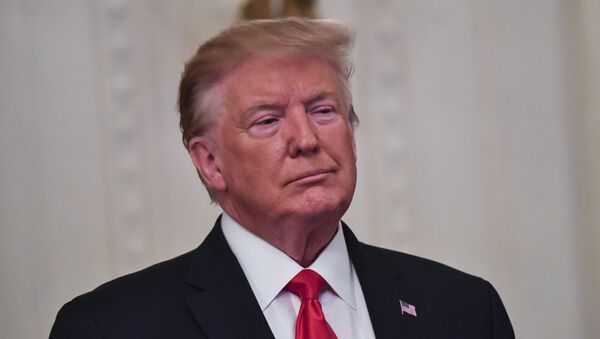 WASHINGTON (Sputnik) - Three US House committees on Monday launched a "wide-range investigation" into President Donald's Trump reported attempts to pressure the government of Ukraine into assisting his re-election campaign.

"In letters to the White House and the State Department, Chairmen Eliot Engel of the Committee on Foreign Affairs, Adam Schiff of the Permanent Select Committee on Intelligence, and Elijah Cummings of the Committee on Oversight and Reform demanded records relating to President Trump’s and [his personal lawyer Rudolph] Giuliani’s attempts to manipulate the Ukrainian justice system to benefit the President’s re-election campaign and target a possible political opponent," the three committees said in a statement.

These initial requests represent the first step in a broad investigation into the matter, the statement added.

The probe comes after Giuliani renewed a push for officials in Ukraine to encourage the incoming government of President-elect Volodymyr Zelenskyy to enforce investigations that might benefit Trump's 2020 re-election campaign.

The chairmen accused Trump of threatening to withhold security assistance to Ukraine in defiance of explicit congressional direction. They also vowed to investigate whether the president was pursuing politically motivated investigations.

"As the 2020 election draws closer, President Trump and his personal attorney appear to have increased pressure on the Ukrainian government and its justice system in service of President Trump’s reelection campaign, and the White House and the State Department may be abetting this scheme," they said.

Trump and Ukrainian President Volodymyr Zelenskyy are scheduled to meet in the US later in September.