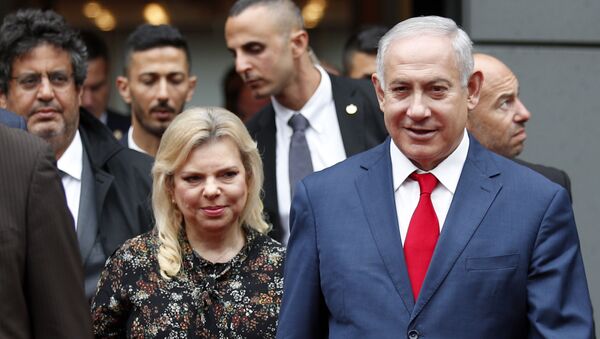 © AP Photo / Francois Mori
Subscribe
Netanyahu is facing accusations of bribery and fraud, which he denies; as two key witnesses in the case expressed doubts over his wife's mental health and told police she chooses the people who work for the prime minister. Netanyahu’s office has dismissed their statements as false.

“She’s completely crazy,” Sheldon Adelson, 86, a casino mogul and publisher of the Israel Hayom newspaper, told police of Sara Netanyahu, according to a translation of the couple’s questioning provided by Haaretz.

“She was compulsive about photos of herself and how she looked. She said ‘I’m the first lady, I’m a psychologist and I teach children about psychology.’ ... She would tell my wife that if Iran attacked it would be her fault … because we didn’t publish good pictures of her,” Mr Adelson, a top donor to the US Republican Party and Israeli causes, added.

According to the transcripts, Miriam Adelson, 73, told police that Sara handpicks the people who work with the prime minister, including staffers and secretaries, and suggested that she might even have an influence over government appointments.

Mrs Adelson reportedly told the police that Sara’s disdain for ex-education minister Naftali Bennett and ex-justice minister Ayelet Shaked prevented the prime minister from forming a coalition with Bennett and Shaked in the April general election.

At the time, Bennett and Shaked ran on the New Right ticket but failed to cross the electoral threshold; they then sought to join a Likud-led coalition (which ultimately failed) but Netanyahu turned down the offer.

Bennett and Shaked are now leading the right-wing Yamina alliance ahead of the 17 September election; despite clashing with Netanyahu on a number of occasions, they recently pledged to back granting immunity to the prime minister in his corruption cases citing concerns over potential “political instability”.

“It bothers me that we have a prime minister whose wife decides everything. I was livid after the last election when he (the prime minister) didn’t form a coalition with Bennett because she hates him,” Miriam Adelson was quoted as saying.

“The fate of the Jewish people is decided because the lady hates Bennett and Shaked, so he doesn't form a coalition with the fitting right-wingers.”

Miriam Adelson recalled one occasion when Sara Netanyahu allegedly “screamed terribly loudly” at her at a dinner and claimed that Miriam was “sucking her blood.”

Miriam – a family medicine doctor and a former Netanyahu supporter – suggested the first lady was “simply not healthy.”

Netanyahu’s office denied the Adelsons’ statements: “Except for the names mentioned there isn’t a single word of truth in this fraudulent report. It is a pile of distorted and defamatory lies. Its entire aim is to harm Prime Minister Netanyahu and his wife on the eve of the election.”

The statements were made as part of the police investigation into Case 2000, which involves allegations that Benjamin Netanyahu tried to conspire with the publisher of the Yedioth Ahronoth newspaper, his long-time critic, in a deal whereby the latter would provide kinder coverage of the prime minister and his family in exchange for weakening Adelson’s newspaper Israel Hayom.

In two other separate cases, Netanyahu is accused of receiving gifts and benefits from several billionaires in exchange for favours, as well as advancing regulatory decisions to benefit the controlling shareholder in Israel’s largest telecom firm in exchange for positive news coverage. The prime minister denies any wrongdoing.