Empty Spaces: A Walk Through the ‘Post-Apocalypse’ of Russia’s Abandoned Places 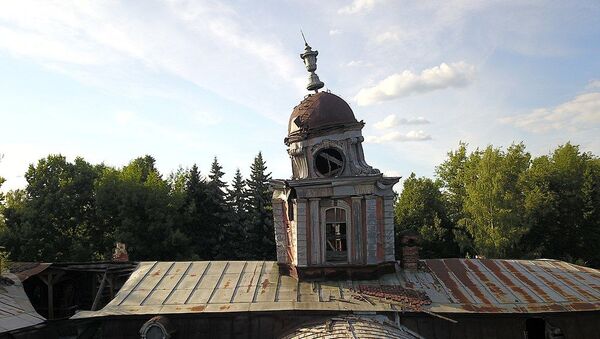 From schools to churches and manor houses, there are a variety of deserted places scattered over a vast expanse of Russia, which are fascinating and creepy at the same time.

A Russian Instagrammer is exploring the aesthetics of abandoned buildings – the faint silhouettes of past epochs hidden under a thin layer of dust.

Polina Reznik is a Moscow-based photographer who runs a travel blog where seaside and mountain photos sit side-by-side with pictures of glass-less, cobweb-filled houses.

Her latest post as of yet is about the ghost building of an agricultural college in Tula Oblast, some 100 km south of Moscow. The walls there sport old banners with Soviet-era drawings and slogans, and the writings on the blackboards remained untouched.

Although all the doors are wide open and the windows are broken, with piles of rubbish visible on the floor, the building does not appear to have been plundered, Polina says.

She describes the experience as “complete immersion into the atmosphere of post-apocalypse”.

Another decaying building she’s been to is the so-called German’s House – a former manor built near Moscow in the waning days of the imperial era in 1912.

The Neo-Baroque-style wooden building is on the federal cultural heritage register, and entry to the area is restricted, so the blogger had to use a drone to take some snaps. The photos reveal a rickety old clock-tower sagging to the side atop a decaying roof.

One particularly intriguing place is the summer camp built at a time when Leonid Brezhnev ruled the Soviet Union for a children’s book publisher in Moscow Oblast. The two-storey building is embellished with massive sculptures of animals and marine creatures, many of which still retain their original colours – and evoke Lovecraftian cosmic horror.

The camp was shut down in 1997 due to a lack of funding and is currently private property. Polina said tourists are allowed in for just $5.

Other posts are dedicated to roofless churches with still-surviving wall paintings, old merchant houses and alehouses – and even an abandoned movie theatre.

Polina’s not the first blogger to bring offbeat destinations in Russia into spotlight. In the summer, a turquoise lake near Novosibirsk became an international sensation and was dubbed the “Siberian Maldives”, despite the fact the swimming there is strongly advised against.