Pakistan Clarifies There Is 'No Change in Nuclear Policy' 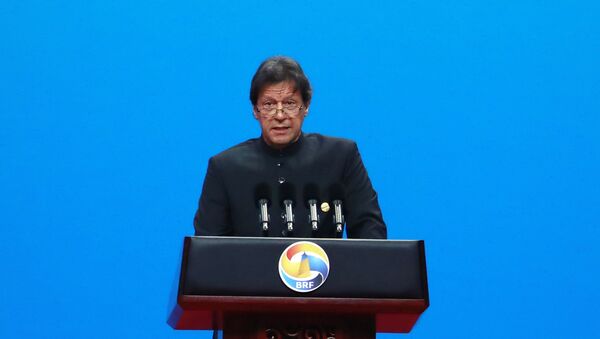 © AP Photo / How Hwee Young
Subscribe
New Delhi (Sputnik): Hours after Pakistani Prime Minister Imran Khan said his country will not initiate a nuclear war with India, his foreign ministry has clarified that the statement was taken out of context and there’s been no change in its nuke policy.

The ministry said the country could use its nuclear assets as a deterrent in the event of an aggressive attack against the state.

Pakistan's nuclear use doctrine has not been clearly specified. But officials maintain that since the first nuclear test was conducted by Islamabad in 1998, it would deter Indian conventional as well as nuclear aggression with an immediate "massive retaliation".

Until recently, Pakistan's prime minister was maintaining that the country would go to any lengths to see justice done for the Kashmiri people. The country's Army chief General Qamar Javed Bajwa also echoed similar statements on several occasions after the Indian government abrogated Jammu and Kashmir's seven-decades-old special status on 5 August and bifurcated the state.

"Pakistan Army firmly stands by the Kashmiris in their just struggle to the very end...We are prepared and shall go to any extent to fulfil our obligations in this regard", General Bajwa had said a day after the abrogation of Article 370, without elaborating further.

On 30 August, while writing in The New York Times, Pakistani Prime Minister Khan sent out a stern warning saying "there will be consequences for the whole world as two nuclear-armed states get ever closer to a direct military confrontation".

The Indian side had also issued a similar threat to Pakistan after a February military confrontation.

Indian Defence Minister Rajnath Singh had remarked that country's "No First Use" nuclear policy depends on the circumstances.