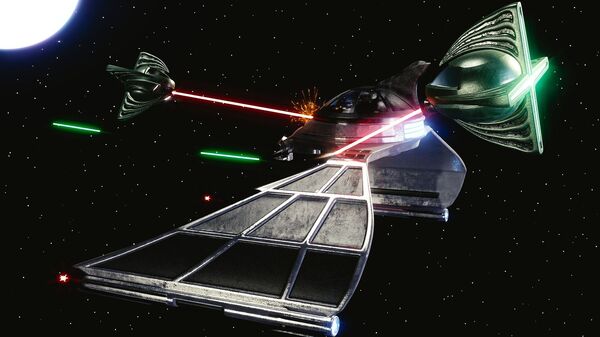 US President Donald Trump wants the US to be ready for new battles - and not on the ground, but in space. On Thursday, Trump announced the official establishment of the US military's Space Command.

“It’s a big deal”, the US president said at the White House's Rose Garden, adding that it would help “defend America's vital interests in space, the next warfighting domain, and I think that's pretty obvious to everybody. It's all about space”.

​But the US Space Command, also referred to as SPACECOM, isn’t something entirely new, technically Trump re-established it as a division within the Department of Defence and the nation's 11th combatant command. It was initially launched in 1985, but 2002 it merged with the US Strategic Command in the wake of the 11 September 2001 terrorist attacks.

Professor Frans von der Dunk, director of public relations at the International Institute of Space Law (IISL), member of the Board of the European Centre for Space Law (ECSL), and member of the Netherlands in the International Law Association's (ILA) Committee on Space Law, called Trump’s decision a logical one, but at the same time downplayed the role that the US Space Command will currently have.

“The establishment of a specific Space Command is essentially a bureaucratic/institutional move providing a bit more political/institutional visibility for the space aspects of national security, and as such merely results in shifting a few people, funds and buildings”, von der Dunk said.

“Given the enormous importance of space for national security, not just in the United States but also for other major powers such as Russia, China, France, the UK, Israel, India, Pakistan et cetera, it is merely a logical move, and actually even fairly modest - the Space Command for the time being at least will still report under the Department of the Air Force, rather than become its own separate branch of the US military”, the scholar explained.

However, Trump has far-reaching plans.

In reality, though, Trump first has to get the Space Force approved by Congress. But even if he gets the approval and the funds, Professor von der Dunk believes that “even that as such would be nothing new, spectacular, or particularly dangerous from an international political field. Most major space powers have a strong military component to their space efforts for obvious reasons of national security, whether this is institutionally reflected by separation of something like a ’space force’ or not”.

Those serving in the US Space Force, Trump said, would be space “warriors”: “The Space Force will organise, train, and equip warriors to support SPACECOM’s mission”, the president said.

While the scholar criticised the move, saying that humans actively engaging in the use of armed force in space is not a clever idea: “I do not think actually putting ‘warriors' in space is a smart military move: if you wish to hurt your enemy, there are much smarter, cheaper and fool-proof ways to do that in or from outer space than by human spaceflight”.

This would also raise substantial international law issues, according to the professor.

“As per Article IV of the Outer Space Treaty, on the moon and other celestial bodies all military activities, manoeuvres, bases and fortifications are prohibited, the only ‘military thing' that is allowed is the use of military personnel for exclusively peaceful, in particular, scientific purposes”.

But could Trump’s move lead to further militarisation or possibly an arms race in space?

In professor von der Dunk view, “it is a chicken-and-egg question: would such an increased spending on military space in the US be a defensible reaction to increased spending on military space of others, such as China and Russia, or would it be a more ‘pro-active’ action by contrast giving rise to others wishing to beef up their military space efforts too, in order not to stay behind? Ultimately, in the absence of full transparency and knowledge on the military programs of the states concerned, this remains a matter of political judgement, but there is no doubt that given the deteriorating international political environment the risk of further militarisation of outer space is larger than it has been for many years”, von der Dunk concluded.

One thing is for certain, Trump has had space on his mind for quite some time. In February, the US president signed Space Policy Directive-4, instructing the Department of Defence to create a separate military service for space.

While in August 2018, after Mike Pence unveiled the Pentagon's Space Force plan, Trump took to Twitter to share his feelings on the matter: “Space Force all the way!”, he tweeted.

Space Force all the way!

The views and opinions expressed by Frans von der Dunk are those of the speaker and do not necessarily reflect those of Sputnik.