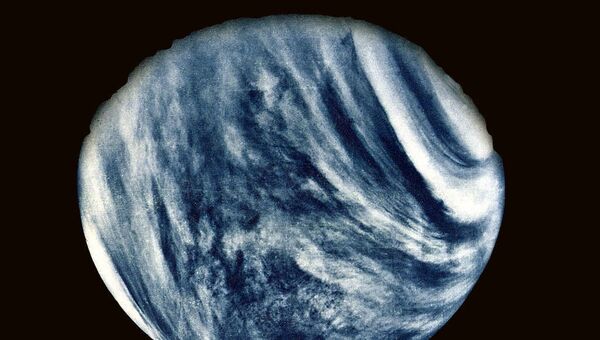 Scientists have apparently managed to establish a link between the strange radiation-absorbing “splotches” present in Venusian clouds and the weather patterns in the planet’s atmosphere.

Scientists striving to uncover the mysteries of Venus have apparently achieved yet another breakthrough, having obtained additional insight into how mysterious formations in the planet’s clouds affect its weather.

According to phys.org, the clouds of Venus contain enigmatic dark patches dubbed "unknown absorbers" due to their ability to absorb large amounts of solar radiation, that were first spotted over a century ago.

"The particles that make up the dark splotches, have been suggested to be ferric chloride, allotropes of sulfur, disulfur dioxide and so on, but none of these, so far, are able to satisfactorily explain their formation and absorption properties," Yeon Joo Lee, a researcher in the Center for Astronomy and Astrophysics at the Technical University of Berlin and senior author of the new report, said.

Having studied the changes in Venus’ albedo using “more than a decade of ultraviolet observations of the planet” from Hubble Space Telescope and planetary probes Venus Express, Akatsuki and Messenger, the researchers determined that the planet’s clouds absorb solar radiation, causing temperature changes that affect wind patterns, with the absorbers affecting the amount of energy that is being reflected into space.

"Since there are few species which have physical, chemical and spectral properties that are consistent with the composition of the Venus clouds, they may have evolved independently on Venus," said Limaye.