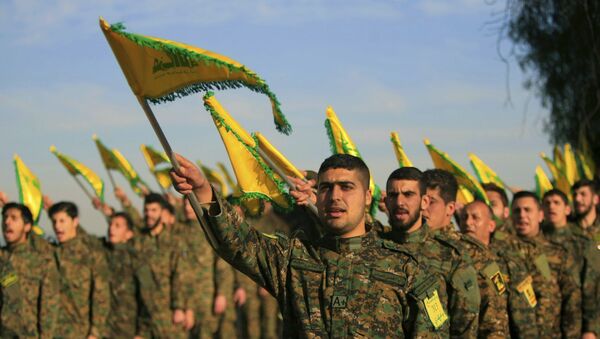 © AP Photo / Mohammed Zaatari
Subscribe
Tensions between Hezbollah and Israel rose on Sunday 25 August, after two Iran-backed organization members were killed in an Israeli strike in Syria and two drones crashed near the Hezbollah headquarters in Beirut.

Hezbollah, an Iran-backed militant group based in Lebanon, is planning a “calculated strike” against Israel in response to the crash of two Israeli drones in Beirut on 25 August, sources told Reuters on Tuesday.

The strike would be a retaliatory measure for Israeli raids in Syria and Lebanon, but would be arranged “in a way which wouldn’t lead to a war that neither Hezbollah nor Israel wants”, according to sources cited by Reuters.

“The direction now is for a calculated strike, but how matters develop, that’s another thing,” a source added.

Two unmanned aerial vehicles (UAVs) crashed near the Hezbollah headquarters in the suburbs of Beirut on 25 August, leading to significant damage to the press building and injuring several people, an accident which Lebanon called an Israeli “attack” on the country’s sovereignty. It is not the first time Beirut has condemned Israel for conducting raids in Lebanese airspace and violating Lebanon’s sovereignty.

“I say to the Israeli army along the border, from tonight be ready and wait for us,” Nasrallah said in a televised speech. “Do not rest, do not be reassured, and do not bet for a single moment that Hezbollah will allow […] aggression of this kind.”

Israeli Prime Minister Benjamin Netanyahu responded in kind to Nasrallah and leaders of Iran and Lebanon, remarking that they should "be careful of what they say and watch their actions".

"I heard what Nasrallah said. I suggest to Nasrallah to calm down. He knows well that Israel knows how to defend itself and to pay back its enemies", said Netanyahu .

Israeli authorities earlier confirmed the Syrian air strikes, arguing that they were aimed at “Iranian Quds Force operatives and Shiite militia targets”, but did not comment on other strikes. Iranian authorities denied that their forces suffered from the strikes.

000000
Popular comments
One side has no fear of death and the other side is scared to death.
Chamroosh
27 August 2019, 23:52 GMT7
000000
"Iran-backed organization " by stating this Sputnik justifies Israel's illegal actions, if Sputnik was balanced they would have at least said "The US backed IDF", they get 4 Billion Dollar every year of American tax payer's money, not to mention the logistics, the most sophisticated weaponry systems, etc. Good luck to Hezbollah, justice will triumph, sooner or later.