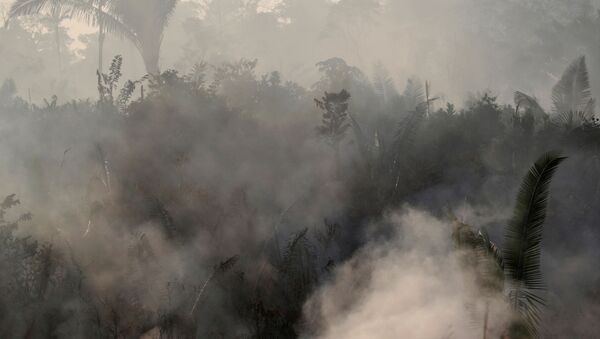 The Amazon – the largest rainforest on the planet – has been ravaged by wildfires burning at a record rate for several weeks. Brazil's President Bolsonaro, who has come under international criticism for his Amazon policies, blames the fires on climate campaigners.

The office of French President Emmanuel Macron has accused Brazil's Jair Bolsonaro of aving lied about climate at the G20 meeting in Osaka.

During talks with Bolsonaro at the Osaka summit, Macron voiced concerns over growing rate of deforestation in the Amazon and urged his Brazilian counterpart not to leave the 2015 Paris climate agreement.

In a statement on Friday, Macron's office also said that France is opposed to the Mercosur trade deal between the EU and South American countries, which is facing opposition from several members of the European bloc.

Earlier on Friday, Finland's Finance Ministry called on the European Union to consider banning Brazilian beef over the Amazon situation.

“Finance Minister Mika Lintila condemns the destruction of Amazon rainforests and suggests that the EU and Finland should urgently review the possibility of banning Brazilian beef imports,” the ministry said in a statement.

Ireland has earlier threatened to block the Mercosur deal if Brazil does not take steps toward protecting the burning Amazon rainforest.

“There is no way that Ireland will vote for the EU-Mercosur free trade agreement if Brazil does not honour its environmental commitments,” Taoiseach (Prime Minister) Leo Varadkar said in a statement on Thursday.

Mercosur is the trade bloc of four Latin American economies – Argentina, Paraguay, Brazil, and Uruguay – which unites 250 million people and accounts for over 75 per cent of the cumulative GDP in South America.

The European Union, which is the biggest foreign investor in Mercosur, formulated a trade agreement with the bloc on 28 June following almost two decades of negotiations.

The deal is yet to be fully ratified by the EU legislatures and their Mercosur counterparts in a lenghty process that could take up to two years.

Irish farmers have criticised the government for endorsing the deal over concerns that imports of South American beef would undermine the local beef sector, given the already-existing oversupply on the European market.

Minister for Agriculture Michael Creed has echoed those concerns, saying in June that the deal would allow the Mercosur member states export 99,000 tonnes of beef to the EU, which he called a “very significant” downside to the trade agreement.

Brazil's space research agency reported this week, citing satellite data, that the country has seen 73,000 fires so far this year, the highest since records began in 2013, and more than half of them were in the Amazon. It represented a 84-per cent increase from the same period in 2018.

President Bolsonaro, who sacked the head of the agency last month amid differences over its deforestation data, accused local environmental groups of setting fires in a bid to embarrass the government.

“On the question of burning in the Amazon, which in my opinion may have been initiated by NGOs because they lost money, what is the intention? To bring problems to Brazil,” the president said at a steel industry meeting in Brasilia this week.

Climate campaigners have denied the accusations and blamed the fires on the government's policies favouring the expansion of mining and industrial farming in the vast rainforest.

Bolsonaro has also come under criticism from foreign nations, with German government suspending $39 million in aid for Amazon forest protection projects in response to his alleged lack of action to tackle growing deforestation in the area.

But Brazil's president stood by his policies, saying that the country doesn't need foreign aid. After Emmanuel Macron described the situation as an international crisis and proposed discussing it at the upcoming G7 summit, Bolsonaro accused the French counterpart of having “colonialist mentality”.