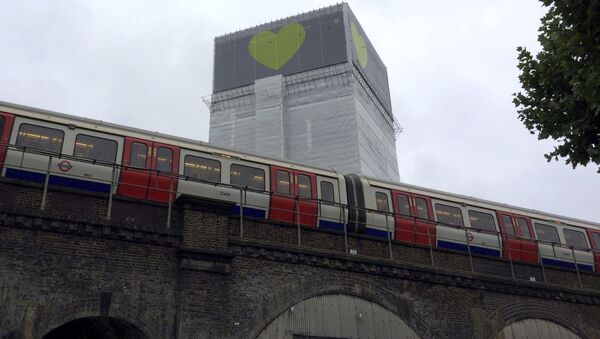 Residents of a block of flats opposite the Grenfell Tower were left shaken on Friday after a fire erupted on a balcony and began spreading upwards, the London Fire Brigade reported.

Around 70 firefighters and ten fire engines were dispatched to the scene of the blaze, near Darfield Way in northern Kensington, amid reports that smoke had been seen rising from the building just before noon.

#Kensington
BREAKING: A fire has broken out in a flat within a tower block on Darfield Way in #NottingHill, #W10.

London Fire Brigade say they currently have 60 firefighters at the scene. pic.twitter.com/78HgiDasNp

A balcony on the 12th floor of a block of flats in #NottingHill is currently alight https://t.co/7KGks5UHKI pic.twitter.com/QLDC4IuIum

Onlookers commented on the conflageration, with one passerby stating that 'everyone is thinking of Grenfell,'

First responders from the London Fire Brigade began hosing down the balcony around 12:30pm, where the blaze appears to be under control. According to social media, the fire could be seen from the 12th floor at Markland House on Silchester Estate.

The blaze at Markland House on Silchester Estate, Darfield Way is across the road from Grenfell Tower in west London, Fire crews said a balcony on the 12th floor is alight pic.twitter.com/B3pUJZ62sZ

A spokesperson from the LFB said: "A balcony on the 12th floor was alight. Crews are speaking to residents in the building to reassure them.

There were no reported injuries, and the Brigade's 999 control officers responded to 27 calls reporting the incident, the LFB said.

The spokesperson added: "The Brigade was called at 1139 and the fire was under control by 1255 but crews will remain on scene this afternoon. Fire crews from North Kensington, Kensington, Fulham, Park Royal, Chelsea, West Hampstead, Soho, Hammersmith and Chiswick fire stations attended the scene.

The cause of the blaze is currently under investigation, the LFB said.

The Grenfell tragedy, which killed 72 people and injured a further 70 residents, prompted major backlash from London residents over concerns about the building's design and safety features, namely cladding on the building's exterior which quickly caught fire during the incident. The blaze began after a faulty fridge in a fourth floor apartment caught fire, leading to a criminal investigation on events leading up to the blaze.

Two years after the tragedy, nearly 100 Grenfell survivors and relatives of victims began suing three firms blamed for the incident, including firms such as cladding manufacturer Arconic, insulation maker Celotex and fridge supplier Whirlpool. Exterior cladding had been installed in 2016 as part of a £10m refurbishment of the Grenfell Tower, but the blaze on 14 June, 2017 spread quickly from the fourth floor and engulfed the building, bypassing all passive fire protection mechanisms in the tower's construction.