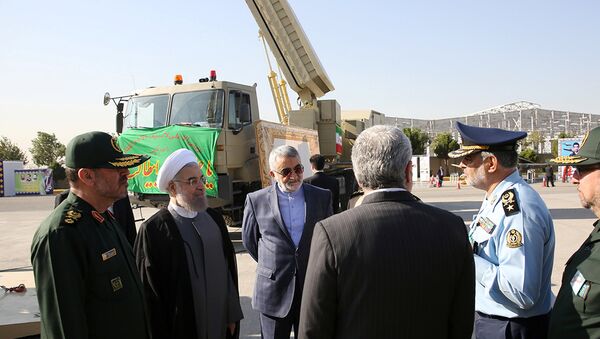 © REUTERS / President.ir
Subscribe
International
India
Africa
The Bavar-373, Iranian version of Russia's S-300 surface-to-air missile system, is a long-range mobile air defence system with a reported maximum range of 200 km, the ability to launch a variety of missile types, and a flight ceiling of up to 27 km.

“When the enemy launches a missile against us, we cannot give a speech and say: ‘Mr. Rocket, please do not hit our country and our innocent people. Rocket-launching sir, if you can please hit a button and self-destroy the missile in the air,'” Iranian President Hassan Rouhani said in a speech in Tehran during the unveiling of the Bavar-373.

Earlier, Iran’s defence ministry announced that the Bavar 373 was already prepared to be sent to the armed forces.

The missile system, designed and developed in Iran, was already tested in 2017. The Iranian military considers Bavar 373 as a competitor of the S-300 system.

Iranian engineers began working on the Bavar 373 in 2010, after Russian President Dmitry Medvedev suspended a $900 million deal signed in 2007 on the sale of the S-300 air defence system to Iran due to Moscow’s adoption of UN Security Council sanctions against the country over its alleged nuclear programme.

In April 2015, Russia resumed the talks on the S-300 deliveries following an interim agreement on the Iranian nuclear program. A year later, Russia delivered the missile system on a previously concluded contract.