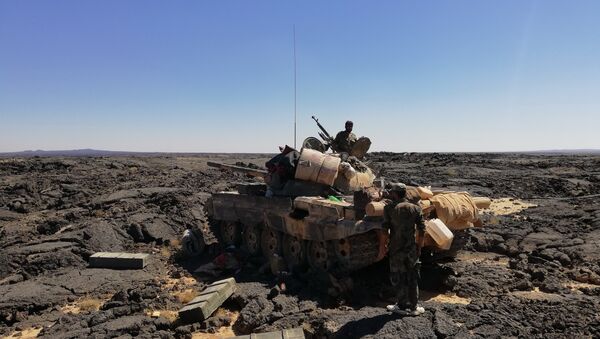 IDLIB (Sputnik) - No serious clashes between the Syrian army and militants have been reported in the vicinity of Khan Sheikhoun city in Syria's last terrorist-held province of Idlib so far, a Syrian military source said on Wednesday.

"There have been no changes around Khan Sheikhoun, the [Syrian] army remains on the outskirts [of the city]. The Syrian army's operations were limited to the shelling of militants' positions at night," the source said.

A military source said earlier this week that the Syrian army had cut the supply route of the terrorists affiliated with former Nusra Front* terrorist group in the province of Hama, blocking the road from Khan Sheikhoun located in neighboring Idlib. The source also said the Syrian troops took up key positions on the northern outskirts of the city.

In early August, the long-discussed truce entered into force in Idlib. The Syrian military leadership said it would resume its military operation in northwestern Syria if Ankara failed to implement its obligations under a Turkey-Russia agreement reached in Sochi last September.

Three days later, on 5 August, the Syrian government forces resumed the operation due to the militants' non-compliance with the ceasefire agreement brokered by Russia and Turkey.